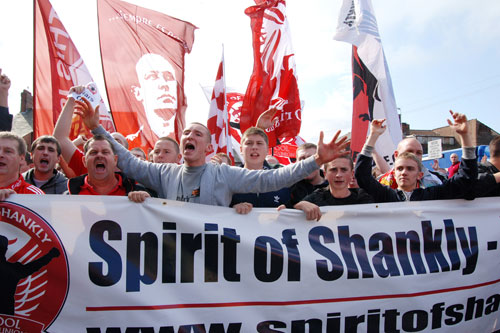 5 August – 2 September 2011 in Unit 28 (Next to Timberland), 1st Floor, MetQuarter. ‘Spirit of Shankly: The Noise that Refused to Be Dealt With’ – An exhibition of photography by John Johnson

When Tom Hicks claimed that Liverpool supporters “are a noise we are dealing with”, he probably expected it to allay the fears of the Liverpool Board, who were becoming increasingly worried by the campaign to force the exit of Hicks and his partner, George Gillett. Supporters, angry and upset at those running Liverpool Football Club, focused and channelled their anger at those responsible. The noise grew louder and eventually, it became unbearable. Hicks and Gillett could not deal with it.

This photography exhibition is a celebration of that long, uphill but ultimately successful battle. As Spirit of Shankly fought to rid the club of Hicks and Gillett, John Johnson captured perfectly the essence of what the Spirit of Shankly was all about – ordinary people, making a difference. From protest marches to big digs, megaphones to mosaics, repossessions to rallies, John documents the story in 16 unique photographs showing the rise of Spirit of Shankly, the Liverpool Supporters Union.

Spirit of Shankly:
“When we started out, we had a number of goals and aims. We’ve been successful in many of these aims and we want to continue to represent our members. John’s photographs are a brilliant reminder of how far we have come and the battles we have fought. John, like many others, has made personal sacrifices to support the Spirit of Shankly and his photography skills have given us a permanent visual reminder of where we have come from and what we have achieved along the way.”

John Johnson:
“As a photographer and lifelong Liverpool supporter I felt compelled to document those dark days of rule at the hands of Mr Hicks and Gillett and more importantly the subsequent uprising from fellow fans. An uprising which would lead to the formation of the Spirit of Shankly, the first independent football supporters Union in the UK.  I hope that this exhibition gives some small insight into that birth, struggle and eventual triumph, as not only did it show the world that Liverpool fans are still a force to be reckoned with but that the Spirit of Shankly truly does still shine on.”

The Basement Newington: Ron Harris An Exhibition of Drawings