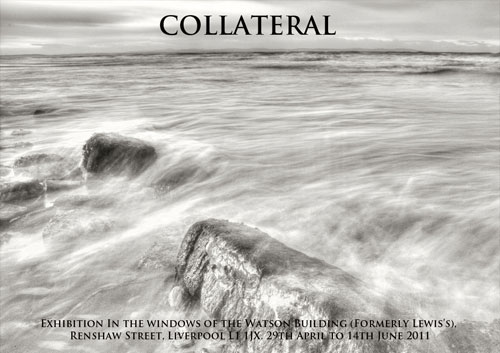 April 29 – 14 June 2011 in the windows of the Watson Building (formerly Lewis’s), Renshaw St.
‘Collateral’ bt Tom Fairclough. To coincide with the 70th anniversary of the May blitz and as a reminder of the impact of conflict on the innocent in the 20th Century Tom Fairclough’s exhibition Collateral returns this year, this time in the Watson Building (Lewis’s) in Renshaw street.

Lewis’s itself was destroyed in May 1941 so it is appropriate that its windows display the thoughts and words of those who endured this period.

The exhibition is on from April 29th to June 14th and is part of the Look2011 international photography festival as well as Liverpool City Council’s shops upfront programme.

You can see more of Tom Fairclough’s images, in support of Urban Strawberry Lunch (USL), in the Daily Post and Echo Atrium, Old Hall Street, as part of the FAB Collective exhibition on display there.

Bodelwyddan Castle: The Phantoms of Surrealism

111b Eastbank Street, Southport: Art In The Kitchen Sink