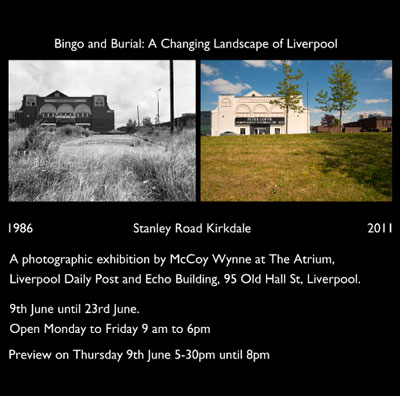 The work shown during Look11 is a revisit in the year 2011 to sites of demolition made 25 to 30 years ago at various locations around Liverpool and originally shown at The Open Eye Gallery.

McCoy Wynne have reproduced, as closely as possible, the original composition although in some cases original references are difficult to recognise.

The images underline the layering of history taking place within the city. Recent city centre developments have made noticeable change, caused by the speed of construction, but structural change is a constant condition of the urban resident.

In the early 1980’s many of the sign-posts of Atlantic trade that built Liverpool: Tate & Lyle, grain silos, dockyard cranes, and warehousing, had been demolished, either removed or relocated. What followed was open space, vegetation, trees, shopping complexes and housing.

The new images in this project are not about the obvious city centre redevelopment, but about the waves of change indicated by the passage of time that have effected the environment of Liverpool residents on the fringes of the city centre.

The visual aesthetic can be defined by working methods. The original photographs were made using a 5×4 camera with black and white film and the contemporary photographs use digital technology. However, the compositional decisions were defined in the original images and this is recreated in the new images employing digital media.

Location: Atrium of The Daily Post and Echo Building
Opening Times: Daily 9am until 6 pm