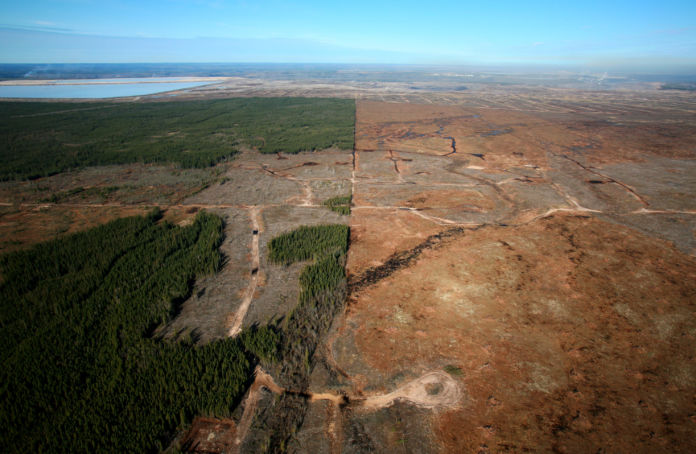 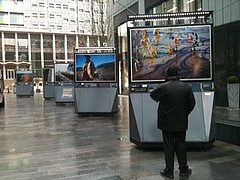 Tarnished Earth, a dramatic open air gallery of photographs by Jiri
Rezac, telling the story of one of the world’s biggest ecological
disasters, arrives in Liverpool this week (01 February).

Staged by The Co-operative in conjunction with WWF-UK and Greenpeace, Tarnished Earth is a free outdoor exhibition touring the UK’s major
cities.

The three metre high installations of astounding images will bedisplayed in Thomas Steer Way, Liverpool One, until 22 February (2012).

Seen by more than five million people, Tarnished Earth shows how Canada’s magnificent Boreal Forest is being destroyed and polluted by the rush to extract oil from the tar sands just below the surface and, is described as “a spectacular presentation of pristine wilderness, human folly, consequences and alternatives – an
exhibition of devastating power”. The photographs are illuminated at night and contrast the destruction
caused by the oil extraction with the area’s pristine wilderness and the traditional way of life of the indigenous First Nation Cree. The exhibition forms part of The Co-operative’s on-going Toxic Fuels campaign.

Paul Monaghan, Head of Social Goals and Sustainability at The Co-operative, said: “It is really important that people see for themselves the scale of the environmental destruction which is being done in order to extract oil from tar sands.

“The greenhouse gas emissions from tar sands oil are far greater than those of conventional oil, and its exploitation alone would be sufficient to take the world to the brink of runaway climate change.

“Tarnished Earth vividly portrays the impact tar sands operations are having on this beautiful area of boreal forest which has been home to wildlife and the indigenous Cree nations for thousands of years.”