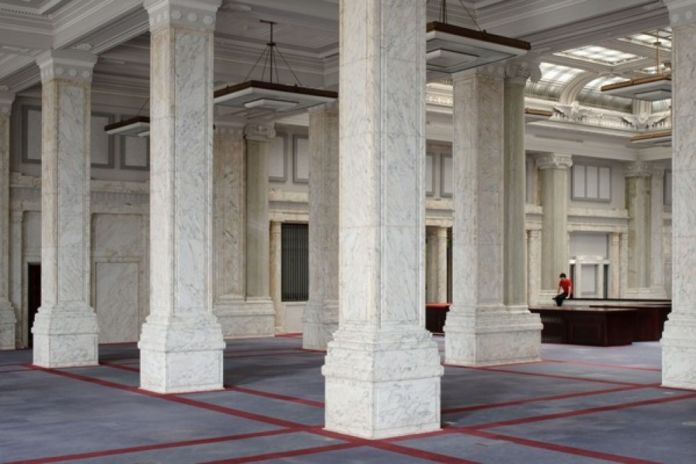 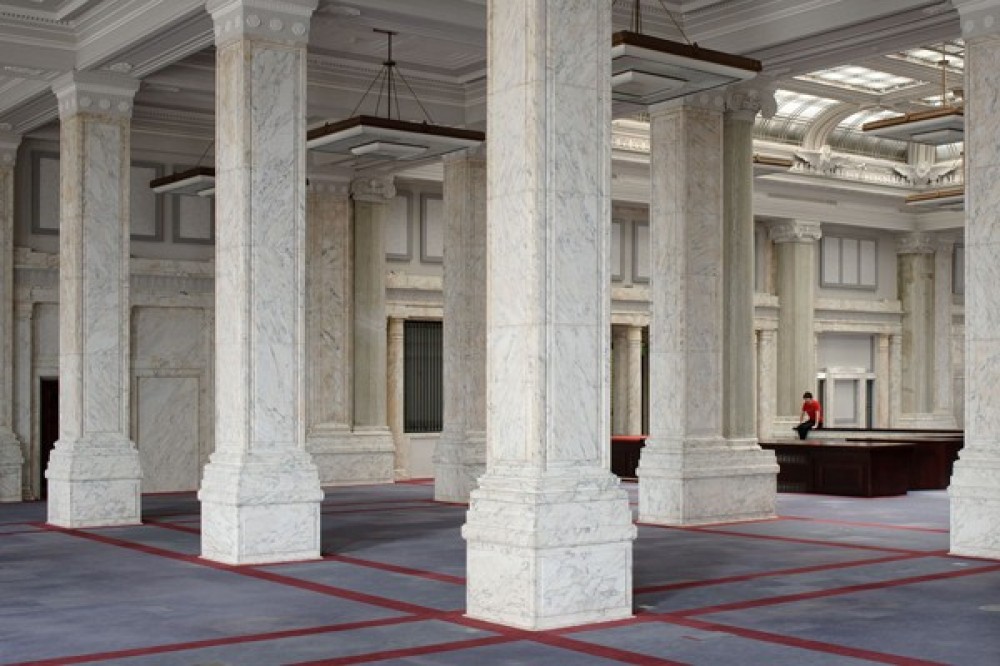 The Unexpected Guest explores notions  of hospitality. Leading and emerging  artists have been commissioned to make  permanent and temporary public artworks,  as well as long-term community-based  projects. Works by over 60 international  artists unfold across the city in its major  galleries and a range of sites including  The Cunard Building, the LJMU Copperas Hill Building, The Monro, Liverpool ONE,  Everton Park and Anfield. Hospitality is the welcome we extend to  strangers, an attitude and a code of conduct  fundamental to civilisation, as well as a
metaphor whose conditions and energy  inspires artists. In a globalising world,  increasing mobility and interdependence  are changing the rules of hospitality.  There are different ‘cultures of hospitality’,  often co-existent in the same place.  Our awareness of such complexity and  migration between nations and cultures makes clear distinctions between host and guest increasingly difficult.  All works are commissioned by Liverpool Biennial unless otherwise stated

Sylvie Blocher
The Series: Speeches, 2012
Blocher’s project is to intervene with  significant political speeches and utopian  manifestos, each of which promised  happiness or emancipation but failed to deliver. Each is re-told in a way that acknowledges changed contexts –  bringing new voices, new forms of energy and a sense of catharsis to the texts. Andrea Bowers City of Sanctuary, 2012 Artist and activist Andrea Bowers amplifies the launch of Liverpool as a City of Sanctuary for asylum seekers and refugees. Bowers and STAR (Student Action for Refugees) have collaboratedwith designer Sam Wiehl to create a visual identity for the campaign. Mona Hatoum A selection of recent works, some of which have never been seen in the UK,  are presented in The Cunard Building. In these works, the viewer will be
confronted by unusual mappings of the  world and ideas of cultural arrogance  and political ignorance.

Jeanne van Heeswijk, Britt Jurgensen,  Debbie Morgan, Graham Hicks and the residents of Anfield
The Anfield Home Tour, 2012
Saturdays 11.30am
Visitors are invited to join a heritage tour  to Anfield. The tour presents the impact
that regeneration has had, and continues  to have, on the lives of people in the  neighbourhood. An intervention and audio  work can be found in The People’s Republic Gallery at the Museum of Liverpool,  amongst the exhibits on labour history.Bus departs from The Cunard Building. Places limited. Booking essential: 0151 702 5234

Nadia Kaabi-Linke
NO, 2012
Parkverbot, 2010
Kaabi-Linke’s newly-commissioned project  presents a dialogue in which a crowd  opposes an individual voice of authority.  The work focuses on the visa process that many endure in order to enter the UK. Kaabi-Linke draws a parallel between these contemporary regulations and the Holy Inquisition, in which brutal judiciary  procedures presumed a guilty verdict  without a fair hearing. Co-produced by Liverpool  Biennial with the Kamel Lazaar Foundation

Jirí Kovanda
Kissing Through Glass, 2007
I Love You, 2008 (at Liverpool Lime Street Station)
Kovanda presents two works: a declaration  of love that unfold through different  media and across different sites, offering  psychological comfort and emotional  shelter to the viewer, unconditionally.
Kissing Through Glass was originally conceived for Tate Modern

Suzanne Lacy
Storying Rape, 2012
Three Weeks in January, 2012
Storying Rape documents a conversation focusing on how the narrative of rape is  presented in society and how re-framing  this narrative might improve public  understanding. During the Biennial, Lacy  will also initiate a series of discussions that give young people, politicians and community leaders the chance to speak  openly about the subject. Please visit www.threeweeksinjanuary.org

Runo Lagomarsino
An Offensive Object in the Least
Offensive Way, 2012
The starting point for Lagomarsino’s new  work was an exchange between the artist  and a neighbour in São Paulo who had  a statue of a macaw decorating her front  yard. This sculpture has been shipped  across the Atlantic to ‘re-encounter’  a similar macaw depicted in a poster  from the early 20th century advertising  a voyage to Brazil, which the artist found  in the Merseyside Maritime Museum.

Ahmet Ög˘ üt
Let it be known to all persons here
gathered, 2012
Ög˘ üt’s film documents a journey  undertaken by a horse rider, dressed as a  postman. The postman rode from Liverpool  to Manchester, and in the style of a Royal  Address, he delivered invitations to attend  Liverpool Biennial.

Trevor Paglen
Prototype for a Nonfunctional Satellite
(Design 1, Build 1: ‘The Kite’), 2012
Paglen’s new work is a functionless  satellite. Constructed from materials that  maximise brightness and minimise weight his sculpture draws upon his research  into the colonisation of outer space by governmental bodies whose own satellites  have a hidden or untold meaning. Christodoulos Panayiotou To create this series of archive  photographs, the artist has researched  the archives of the press and government  in Cyprus. Panayitou has selected images that document the way in which the political concerns of the island have shaped the narrative of Greek-Cypriot historiography and culture.  Courtesy of the artist and Rodeo, Istanbul

Mikhael Subotzky and Patrick Waterhouse
Ponte, 2008–11
The vast, cylindrical Ponte building,  now a symbol for social and economic  downturn, has dominated the  Johannesburg skyline since the 1970s.  Subotzky and Waterhouse became  fascinated by the fictions and myths  projected onto the structure, including tales of prostitution rings and frequent suicides that mark the failure of its utopian intentions.
Courtesy of the artists and Goodman Gallery

Superflex
Liverpool to Let, 2012
The artists were struck by the abundance  of empty office and commercial spaces  in Liverpool’s financial district. They  painstakingly re-staged ‘To Let’ signage as banners within The Cunard Building.