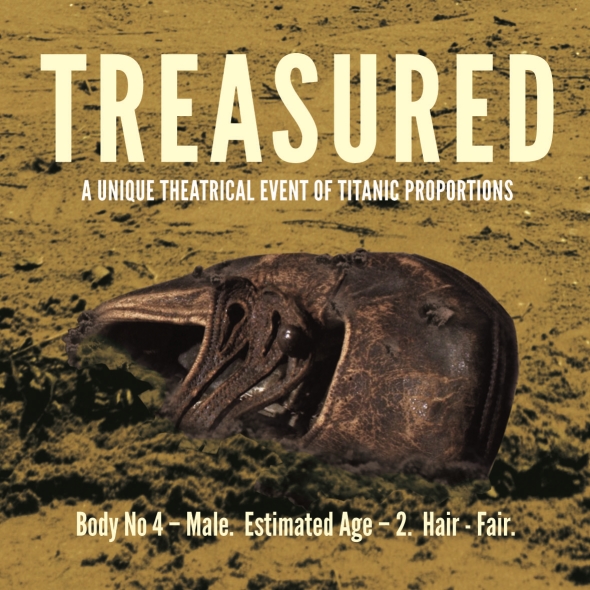 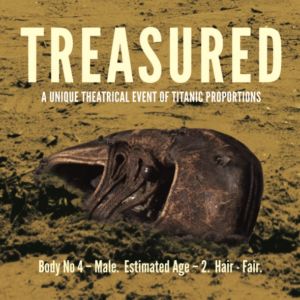 Schools: £5 (teacher free with every 10 students)

Treasured, a unique, large scale multimedia theatrical event is set to transform Liverpool Anglican Cathedral into a living, breathing canvas of Titanic proportions from 1-6 October this year.  Inspired by one of the most powerful tragedies of the last 100 years, the story of the HMS Titanic, Treasured aims to move beyond simply re-telling the tale of that fateful maiden voyage in 1912, and explores the stories of those left behind and those who were taken by the seas.

Jen Heyes, the creator of Treasured, is proud to announce the accomplished cast of professional actors and musicians who will be a key component of this awe-inspiring production.

The Treasured actors are:

·         Nick Birkinshaw who for 10 years has toured nationally and internationally with groups such as Moving Being, Kaboodle, Doppelganger and Kiss Theatre and worked in arts and regeneration in Merseyside for over 25 years. He appeared in Jen Heyes/Andrew Sherlock’s Wall Talks as part of Liverpool Biennial 2004 and again in 2007, and in Walk The Plank’s multi-media SWALK production. Nick will play the character of ‘Artifact Man’ in Treasured.

·         Laura Campbell, a Liverpool-based actor, musician and performer will play Annie. Her past theatrical performances include The Cenci at the Edinburgh Festival, The Quiet Little Englishman at the Park Palace Liverpool and Rush at National Museums. Laura’s TV work includes Bad Girls, Queer As Folk, and as one half of the electronic duo Mulu, Top Of The Pops, The Sunday show and MTV.

·         Christopher Hollinshead plays Mattie and Seanie. Christopher has a wealth of experience in performing Shakespeare including Romeo and Juliet at Northern Broadsides and Manchester’s Royal Exchange and Richard III at the Globe Theatre and Demi Paradise. Other work includes roles in The Library Theatre Company’s Carrie and Contact Theatre’s Space Dread. He also appeared in The Street produced by Granada for the BBC and BBC2’s In a Land of Plenty.

·         Brian Dodd who plays Jimmy, Pat and Manuel is a regular performer with Cut to the Chase Productions most notably in September in the Rain (Floral Pavilion), Blood Wedding (Liverpool Playhouse), Wall Talks (Tobacco Warehouse) Trapped and The Three Lives of Lucie Cabrol at Unity Theatre and Therese Raquin at Ustinov Studio Bath. Brian was MC for the Liverpool Capital of Culture 08 Peoples Opening (St Georges Plateau), and has also appeared in a diverse range of other productions including Cupcakes and Carousels, Teechers, The Exorcism, One for the Road, Dancing at Lughnasa, Othello, Oedipus Rex, The Last Judgement and Antigone.

·         Nicola Bentley plays Lucy. Nicola has worked extensively both locally and nationally with theatre companies such as Red Ladder and 20 Stories High and in was recognised as Liverpool’s Best Actress by Made Up: On Stage in Liverpool for her role of Kerrie, in the award-winning Blackberry Trout Face.

Jen Heyes said:  “Creating Treasured has provided me with a unique opportunity to collaborate with some of the most accomplished and exciting contemporary artists working in theatre today. As individuals their work is magnificent, by working collectively  in a space as awesome and as challenging as Liverpool Anglican Cathedral means we are creating something very, very special indeed”

Treasured’s writer and composer is Ailis Ni Riain, who has this year been awarded the Erhardt Bursary by the Peggy Ramsey Foundation . Born in Cork, this international prize-winning classical composer and published playwright produces work which challenges, provokes and engages. She is particularly interested in cross-discipline collaboration, new writing for performance, concert music, sound installation, opera, music-theatre and presenting contemporary music in diverse spaces.  Her music has been broadcast on BBC Radio 3 ‘The Verb’ & ‘Hear and Now’, BBC 4′s The Today Programme and Woman’s Hour, RTÉ Lyric FM and RTÉ One in addition to a documentary for Channel 4′s Big Art project.  She received her Purcell Room, Southbank debut in 2007 and her Carnegie Hall debut in 2008.

Ailis said: “Working on Treasured as both the composer and writer has been a unique and rewarding opportunity for me. Treasured is a particularly special project because it allows me to fully immerse myself in the sculpting of both the spoken and musical worlds where normally I am required to focus on one or the other. As a composer who also writes words, it feels natural to me that I would fulfil both roles for Treasured. For me, when a character says something aloud it is accompanied in my head by a musical subtext. I have aimed to bring these elements together through the writing and composing of Treasured.”

Treasured continues Liverpool Cathedral’s long standing commitment to hosting innovative and contemporary performances and the cast will interact with large scale film by Illuminos who work with projection, light and sound to create works that directly stem from the buildings, spaces and places they engage with. Wired Aerial Theatre – who brought the highly acclaimed As The World Tipped to the cathedral in 2008 – also form part of this stunning production, amazing the audience with their mid air moves. With breathtaking soundscapes, a community chorus, the grandeur of this world famous building and the audience right in the centre of the action, Treasured is truly an event like no other.

Treasured is co produced by The Aspire Trust – a charity dedicated to transforming peoples’ life stories through creativity.