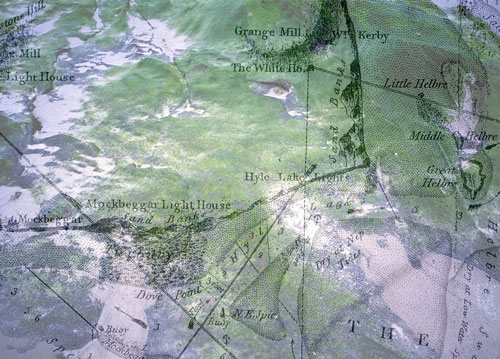 This collaborative project is an ongoing artistic interpretation of the environment (an SSSI) around Hilbre Island and the head of the Dee Estuary on the North Wirral Peninsula coast. It seeks to explore the  environmental changes that have, and continue to shape this fragile, low-lying inter-tidal landscape.

**Please note, the exhibition is open to the public however viewing must be pre-arranged with the NOC Library (0151 795 4800). Liverpool University staff and students have unlimited access to the exhibition, no booking required.
6 Brownlow St, Liverpool, L3 5DA. Open 10-17.00 Monday – Friday.

Hydrography traces human interaction with the landscape (both literally and abstractly) through early  20th century building of the coastal defences; the cartographic charting of the Wirral and Liverpool Bay since the early 17th century, and also the ecological surveys and archaeological studies of the coastline conducted since the late 19th century.

Underpinning this project is a strong element of historical research, exploring local library archives  and studying historical maps of the Wirral Peninsula. Through this engagement with archive material  an important part of the project ethos has been harnessed; the use of appropriated historic material to support, and, in some cases to be used as art objects.

Brady & Carter’s ongoing fieldwork expeditions out to Hilbre Island remain at the core of this  project’s philosophy. The use of photography, video, sound (field recordings) and appropriated maps enables them to reflect on the historic and contemporary aspects of this landscape.

Another key element of engagement with this environment is the artists’ awareness of current research that the Coastal Observatory (National Oceanography Centre) is conducting off the coast in the Irish Sea.
This diverse and complex marine research facilitates a deeper understanding of the wider environment  and consequently the evolution of the coastline’s ecosystem and landscape.

Scientific acoustic data for this project has been provided by Dr. Ben Moate, which evidences the ever-shifting, ephemeral nature of the coastal sands. This sonic material is derived from tidal sonar readings of underwater sediment (sand) activity at the head of the Dee Estuary, just off the edge of Hilbre Island.

The results of the Hydrography project have previously been presented publicly in two exhibitions: firstly in the form of a sound/video installation in the Mersey Basin exhibition at Liverpool John Moores University Art & Design Academy (March 2010); and secondly, as a portable sound installation in the (space between) exhibition at the International Gallery for the Liverpool Biennial 2010 international festival of contemporary art (October 2010).

This exhibition here at National Oceanography Centre presents the further development of Brady & Carter’s research. It brings together some new cartographic artworks and photographs, with the ‘sonic ecology’ sound artwork which is a collaged composition of field recordings and manipulated acoustic sonar data.