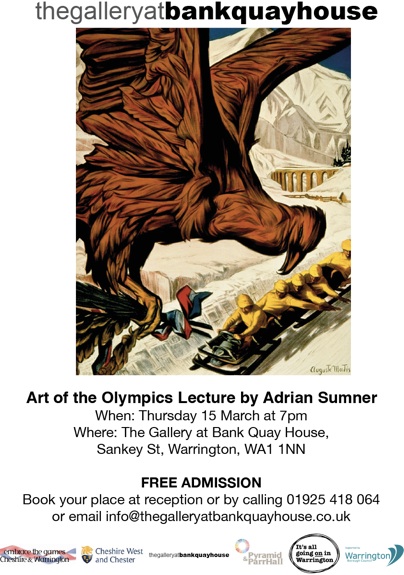 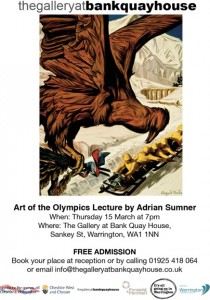 In addition to the exciting, month long exhibition of Olympic Posters currently being exhibited at The Gallery At Bank Quay House, Warrington, we welcome back Adrian Sumner, from Cheshire West and Chester Council, who will be giving a profusely-illustrated FREE lecture on Art of the Olympics.

The exhibition which presents the complete set of official Summer Olympic posters, from the Olympic Foundation in Lausanne, features some of the most famous sporting images of all time.  The posters are remarkably evocative of the times, which produced them, from the Belle Epoque grandeur of the first examples , through the Art Deco streamlining of the ‘20s and ‘30s, via the Op and Pop and Minimalism of the ‘60s , to the Post Modernism of the most recent.

Many of the artists commissioned to design them are world-renowned, for example, Robert Rauschenberg and Ludwig Hohlwein, but all have managed to give the most vivid snapshots of the ever-changing world of Sport and Politics which is the context of ‘The Olympics’ through the ages.

Adrian will be giving a FREE lecture to go alongside the exhibition this Thursday 15th March, 7pm, at The Gallery At Bank Quay House, Sankey Street, Warrington, WA1 1NN

Book your free place by calling 01925 418 064 or email info@thegalleryatbankquayhouse.co.uk
Places are limited so booking is a must!

The Artbus is Coming Back !