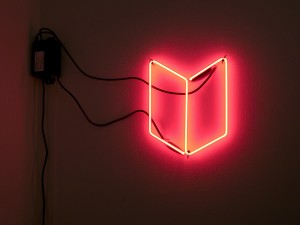 This autumn Tate Liverpool presents The Serving Library. Including a collection of art works, artefacts, books and other materials, it will ask visitors to reconsider the traditional role of the library.

Drawing on 14 years of the publications Dot Dot Dot and Bulletins of The Serving Library, illustrations from the journals’ pages reappear in their original forms as exhibited works. Featuring around 100 such objects, The Serving Library at Tate Liverpool will include airbrush paintings by UK-based artist Chris Evans, a stencil print of Muriel Cooper’s pioneering 1977 Polaroid self-portrait, an upside down photograph of Harry Beck’s 1931 London Underground map sketch, and a ouija board made by artist and designer Paul Elliman for a séance to contact artist Josef Albers.

The Serving Library will be ‘resident’ within the architectural structure designed by French architect Claude Parent and built in the Wolfson Gallery. Entitled La colline de l’art (Art Hill) 2014, it was originally installed as part of Liverpool Biennial exhibition, A Needle Walks into a Haystack. The Serving Library is running concurrently with Transmitting Andy Warhol and Gretchen Bender to form Tate Liverpool’s autumn/winter season. Entitled Making Things Public, visitors will explore how artists from different generations have responded to and experimented with the pervasive influence of mass and broadcast media.

The presentation of The Serving Library in a temporary exhibition form highlights it as an evolving project that generates a pool of knowledge around the tools with which information and ideas are communicated. The Serving Library is a non-profit organisation that will eventually establish a fixed home with a flexible range of functions, operating simultaneously as a library, a bar and a seminar-room. The exhibition at Tate Liverpool is the next step in this development.

Tate Liverpool: Threats to Freedom, Privacy and the Public Sphere in...