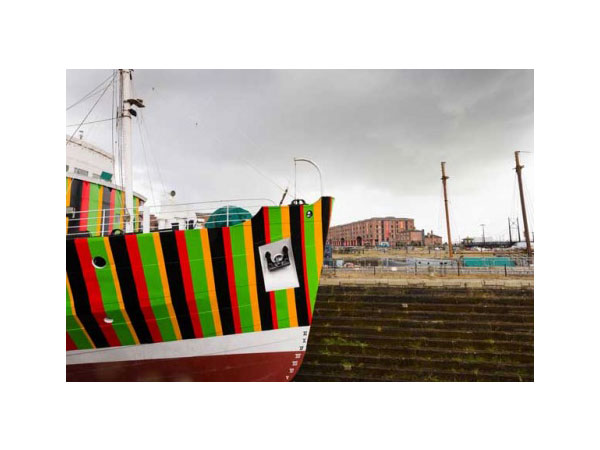 On until end of 2015
FREE
Liverpool Biennial, 14-18 NOW WW1 Centenary Art Commissions and Tate Liverpool present a joint commission by Venezuelan artist Carlos Cruz-Diez who has painted a contemporary version of a ‘dazzle ship’ with ‘dazzle’ camouflage in partnership with National Museums Liverpool.

The Edmund Gardner, an historic pilot ship situated in dry dock adjacent to Liverpool’s Albert Dock has been transformed into a new public monument for the city. Dazzle painting played a vital role in the protection of British navel and trade vessels during the First World War when it was introduced in early 1917 as a system for camouflaging ships.

Dazzle camouflage was achieved by painting the ship in contrasting stripes and curves that broke up its shape. Characterised by garish colours and a sharp patchwork design of interlocking shapes, the spectacular dazzle style was heavily indebted to Cubism. The ship is accompanied by a display exploring the history of Dazzle Ships and the role of artists in the First World War.

Take a guided tour of the Dazzle Ship.  Lead by the Museum of Liverpool, see behind the scenes on the ship from the engine room to the wheelhouse in our free guided tours. Tours are held at 11.00, 12.30 and 14.30 on Tuesdays and Wednesdays in June, July and August.  Each tour lasts for up to 1 hour. Places are limited so advance booking is essential, telephone 0151 478 4545. For more information, please visit the Merseyside Maritime Museum.