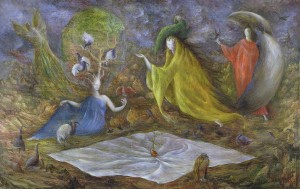 Tate Liverpool is to present the first UK solo exhibition of work by Leonora Carrington (1917-2011) for over 20 years. Leonora Carrington explores the fantastical world of the painter and internationally celebrated member of the surrealist movement.

A prolific painter, the exhibition looks at how the artist established her distinctive take on surrealism; characterised by eccentric beings which shift between plant, animal, human and object; between reality and otherworldliness. Taking key paintings as its starting point Leonora Carrington examines Carrington’s diverse practice and uses the artist’s own words, brought together by Mexican author Chloe Aridjis, to narrate the display.

In the mid-1930s Carrington turned her back on her upper-class upbringing in northern England, embarking upon a complicated relationship with German artist Max Ernst in France before spending a short time in Spain during the Second World War. Her creative practice at this point encompassed writing short stories, drawing and painting. 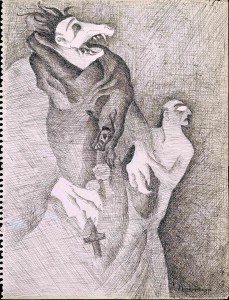 It was after arriving in Mexico in 1942 that Carrington’s practice expanded further as she populated plays, sculptures and textiles with her extraordinary worlds. In 1947 her work was included in an international exhibition of surrealism in New York, where she was the only female British artist featured, establishing her pivotal role within the surrealist movement. In the 1950s and 60s Carrington broadened her practice and embraced set and costume design for productions including her own, Penelope 1957, and films, for which she designed sets and costumes, as well as performing as an actress.

A major highlight in the exhibition will be The Magical World of the Mayas 1964, a 4.5 metre long mural painted by Carrington for the opening of the new Museo Nacional de Antropología in Mexico City in 1964. On display for the first time outside Mexico it serves as a monument to Carrington’s relationship with Mexico, the country she adopted as her home.

Refusing to be constrained or restricted by expectations or conventional limitations, Carrington’s expanded practice has made her an inspiration to many contemporary artists working across a range of mediums. Her patron Edward James commented in 1975 that ‘she has never relinquished her love of experimentation, the result being that she has been able to diversify and explore a hundred or more techniques for the expression of her creative powers’.

Leonora Carrington is exhibited alongside Cathy Wilkes as part of Tate Liverpool’s spring season, Surreal Landscapes. Also running concurrently in the ground floor Wolfson Gallery will be György Kepes. Together they are three artists who, working in different periods, are variously connected by motifs alluding to invented worlds, domestic objects and settings, an interest in assemblage and a sense of mystery.