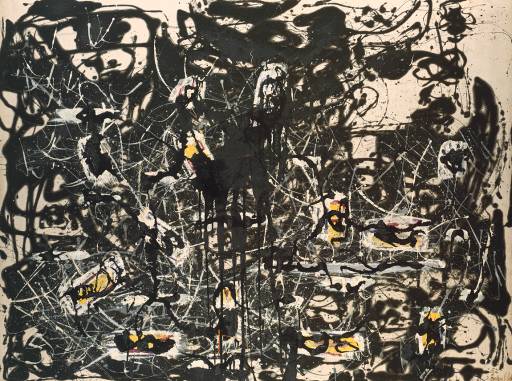 Jackson Pollock (1912–1956) is widely considered to be one of the most influential and provocative American artists of the twentieth century.

Pollock famously pioneered action painting, a process that saw him drip paint on canvases resting on the studio floor. Jackson Pollock: Blind Spots presents the first exhibition in more than three decades of Pollock’s paintings made between 1951 and 1953, shedding light on a less well known but extremely influential part of his practice and departure from his signature technique.

Jackson Pollock: Blind Spots brings together the most significant showing of this widely debated body of work in a public institution since 1980. These paintings had a profound impact on the language of contemporary art, with noted art historian Michael Fried commenting that it was while Pollock was making his Black Pourings that he was ‘on the verge of an entirely new and different kind of painting … of virtually limitless potential’.

Created after nearly four years of colourful, lyrical, decorative, non-figurative paintings, the Black Pourings marked a major turning point in Pollock’s style. Feeling compelled to re-invigorate himself and his practice during a difficult period in his life, it was a deliberate move from his defining ‘drip’ technique to a new ‘pour’, anticipating the arrival of post-painterly abstraction in the late 1950s and early 1960s.

This exhibition will take visitors on a journey through the artist’s practice, starting with a room featuring a selection of paintings from 1947–49 as an introduction to the innovative directions represented by the Black Pourings period. Exhibiting works from the peak of the artist’s fame juxtaposed with his lesser known work offers the opportunity to appreciate Pollock’s broader ambitions as an artist and better understand the importance of the ‘blind spots’ in his practice.

Presented alongside the Black Pourings will be drawings from the same period, regarded as his most important and productive as a draughtsman, as well as a number of virtually unknown and rarely seen sculptures. With an immense material power beyond their tiny scale, these enigmatic works will be a surprising discovery for many and, along with his paintings, reveal Pollock’s extensive practice.

Jackson Pollock: Blind Spots explores this immensely rich and relatively neglected body of work and will provide new insights into this pivotal artist’s contribution to and influence on post-war art.

This exhibition is a collaboration between Tate Liverpool and the Dallas Museum of Art, where it will then be on display 15 November 2015–20 March 2016.

Tate – ‘Bring Your Own Art’ Day