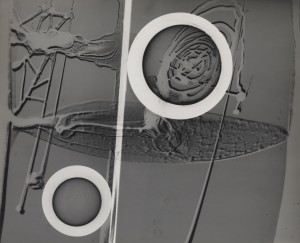 On display will be photographs, photomontages and photograms, all of which were made shortly after Kepes’s emigration to the United States in 1937. His ‘camera-less’ photograms were made in the darkroom by arranging and exposing objects directly on top of light-sensitive paper; juxtaposing geometric, industrial, typographic and organic forms to create images that are poised between abstraction and representation.

Kepes utilised a wide spectrum of imagery and techniques in his work, including but not limited to: geometric studies of prisms and cones; the refractive properties of mirrors and lenses; mechanical forms including propellers and gears; domestic objects such as fabric, sieves and string and items drawn from the natural world, which ranged from feathers and bone to close-up fragments of the human body. 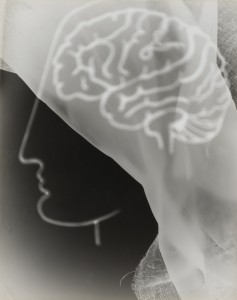 He graduated in 1928 from the Academy of Fine Arts, Budapest and in the early 1930s worked in the Berlin studio of fellow Hungarian and Bauhaus professor László Moholy-Nagy. Fleeing Nazi Germany for London in 1935, two years later Kepes relocated to Chicago to head the Colour and Light department of the New Bauhaus School, established by Moholy-Nagy in 1937. Kepes wrote his landmark publication Language of Vision 1944 in the same period in which these 80 photographs were made, asserting that ‘the visual language is capable of disseminating knowledge more effectively than almost any other vehicle of communication’.

Highly prolific and interdisciplinary, Kepes promoted collaboration between the visual arts and science and technology throughout his career. His pioneering group of six edited anthologies known as the Vision + Value series, first published in 1965-66 and also included in the exhibition, brought together essays by leading artists, scientists, musicians, designers and philosophers on topics related to visual education ranging from symmetry, rhythm and motion, nature and environmental arts, to the social impact of design.

György Kepes will demonstrate the artist’s experimental approach to photography, a medium which he understood as an instrument of modern technology able to connect his painting, films, scientific experiments and environmental art projects.

György Kepes is programmed in parallel with special exhibitions, Leonora Carrington and Cathy Wilkes as part of Tate Liverpool’s spring season, Surreal Landscapes. Together they are three artists who, working in different periods, are variously connected by motifs alluding to invented worlds, domestic objects and settings, an interest in assemblage and a sense of mystery.

Mondrian and his Studios: Abstraction into the World