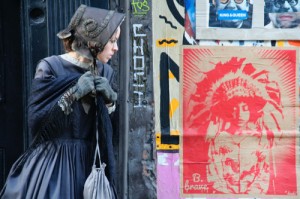 Sue Clayton was invited last year by London’s Leyden Gallery to create a new work for their inaugural exhibition ‘Fabrication’ in response to her seminal film, The Song of the Shirt. Her reply has been Fournier Street, the production of a photographic installation to provide a new contemporary context for it. In her exploration, once again of the icon of the Victorian seamstress, she has worked to present a protagonist across a set of stills, who both retains the constraints of her situation and class – tightly corseted body, dark plain clothes, the sense that she remains on the edge of society – and yet can explore it precisely from that edge, can re-visit the microcosm of Spitalfields with its continued history of migration and of immersion in the clothing and fabric trades, and can seek in the re-vitalization of the area, further pleasures as well as constraints.

This new narrative mirrors the story of ‘A Woman’s Wrongs’, the novella within The Song of the Shirt that is read by various of the characters, and parodied by the sewing women, women who act it out. While in that story the heroine is abandoned in the street by her suitor and his upper-class family, in this re-working she absorbs the culture of East London’s fashionable night-life and experiences at least an illusion of choice – of clothes, of food, of art, of human society – though in the end chooses to be alone.

Navigating between the image of woman as past icon of suffering and current active protagonist, is something that many women artists and film makers have to address. The Victorian seamstress may be limited and defined by her material and economic role, but she or we can here investigate its contradictions- sexual yet restrained, a labourer yet an entrepreneur, a muted voice yet a silent bearer of visual messages- and so fabricate her tale of contradictions and search for value and values, in this this thematically dense and rich domain – Spitalfields.

Tate Liverpool: Threats to Freedom, Privacy and the Public Sphere in...

Tate Liverpool: Film Screening & Seminar on The Song of the...