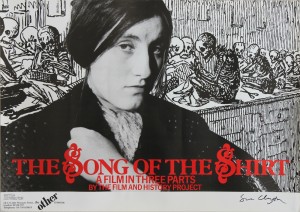 The Song of the Shirt: Directed by Sue Clayton and Jonathan Curling

Join us for a day of films and discussions.

Made at the height of the radical 1970s, The Song of the Shirt (1979) is a poetic black and white feature film about women, sexuality, politics, music, early photography and fashion. Set in 1840s Spitalfields, London, the film looks at both the romance and the fearful class hysteria that surrounded the thousands of women who arrived in the city to work in the clothing industry. The film combines past and contemporary images to portray the radical potential of these women and their age.

The screening is followed by a seminar focusing on the question: What insights can this radical filmmaking – both style and practice – offer the new digital generation of artists and filmmakers?

Filmmaker and feminist theorist Laura Mulvey leads the seminar, exploring the radical practice that produced it and other significant films of the time.

Curator Kodwo Eshun discusses the influence the film is having on the new generation of film and video artists, who are finding inspiration in its Indie ‘poor cinema’ acting style, and innovative layering of video, split screens and multi-textual images.

The film’s co-director Sue Clayton then presents Fournier Street (2013), her new gallery interpretation of the film’s themes which looks at culture, sex and style in today’s Spitalfields, through the eyes of the Victorian film heroine.

11.00 Greeting from Tate, Introductory lecture by Laura Mulvey ‘British Experimental Film in the 1970s; a Historical and Aesthetic Context’

14.00 Screening of Song of the Shirt part 3 and epilogue.

15.00 Talk by Kodwo Eshun: ‘Song of the Shirt: A Cinema of Exemplarity’ on the effects and influence of the film

15.45 Talk by Sue Clayton: ‘The Making of Song of the Shirt, and her new work Fournier Street’ (available to see in the Studio at Tate Liverpool from April 28 to April 30)

16.15 Discussion and other contributions chaired by Laura Mulvey.

Tate – Biennial ‘Made Up’