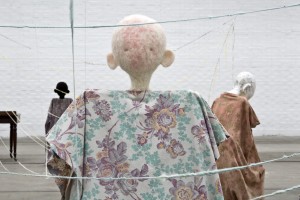 Tate Liverpool will present the largest and most comprehensive display of work to date by artist Cathy Wilkes (b. 1966 Belfast). Bringing together more than a decade of the artist’s acclaimed work, this unique exhibition includes several of her large-scale sculptural installations alongside paintings, works on paper and archive materials.

Best known for her imaginary environments which recall poetic visions, her installations evoke places of loss or transformation. Her work is occupied by beings, often of unspecified gender: infants, elders and animals. It includes collections of objects and treasured ingredients accumulated from daily life, for example baking parchments, cloths, towels, cups and plates and biscuits.

On display in the exhibition will be Untitled (Possil, at last) 2013 a piece that was included in The Encyclopedic Palace at the 55th Venice Biennale. Four child-like figures stand around a male figure crouched over a bottle, two are infants, one is a bride; another figure might be a shepherd. As if in a garden, a taller girl stands before an expanded field of broken pieces unearthed from the ground where Possil Pottery once stood. 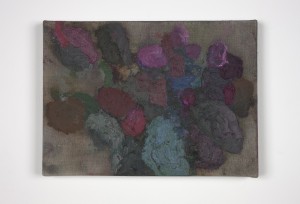 Born in Belfast in 1966, Cathy Wilkes attended Glasgow School of Art from 1985 to 1988 before completing a Master of Fine Arts at the University of Ulster in 1992. She has exhibited nationally and internationally at prestigious organisations such as the Carnegie Museum of Art, Pittsburgh and the Walker Arts Center. Her work Untitled (Possil, at last) 2013 was included in the 55th Venice Biennale in 2013. In 2008 she was nominated for the Turner Prize for her solo exhibition at Milton Keynes Gallery. Wilkes lives and works in Glasgow.

Cathy Wilkes is exhibited alongside Leonora Carrington as part of Tate Liverpool’s spring season, Surreal Landscapes. Also running concurrently in the ground floor Wolfson Gallery will be György Kepes. Together they are three artists who, working in different periods, are variously connected by motifs alluding to invented worlds, domestic objects and settings, an interest in assemblage and a sense of mystery.