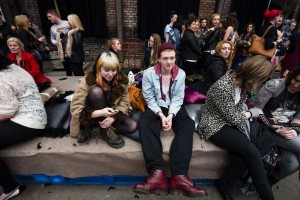 A free festival of music, performance, art, dance and unexpected encounters that has been programmed by and for young people aged 15 – 25.Led by Tate Collective Liverpool, an ongoing youth art initiative Blueprint Festival takes place as part of Flux Liverpool, a city-wide festival for young people in Liverpool from 17 July – 2 August 2014. Happening at arts venues around the city, the festival will give young creatives the opportunity to showcase their talent through workshops, exhibitions, and performances.

The Blueprint Festival 2014 and its accompanying exhibition is part of Circuit, a four year national programme connecting 15 – 25 year olds to the arts in galleries and museums working in partnership with the youth and cultural sector. Led by Tate and funded by the Paul Hamlyn Foundation, it provides opportunities for young people to steer their own learning and create cultural activity. The festival also offers participants the opportunity to develop an arts community and learning network with peers and professionals.

The festival starts with the launch party on Friday 18 July from 6pm at Tate Liverpool featuring performances by acclaimed young bands including headline act Stealing Sheep supported by The Orielles. Visitors will also have the chance to get a first glimpse at the Blueprint Festival 2014 exhibition, a two week showcase of work by emerging artists curated by Tate Collective Liverpool and a selection panel of high profile arts professionals, including the former Turner Prize winner Mark Leckey. The launch party will then continue at an event at The Kazimier from 8pm.

On Saturday 19 July, from 1pm onwards, visitors to Tate Liverpool can take part in Rub-a-glove beatboxing, lyric writing and MCing workshops, listen to music and performance poetry, or try out some design inspired by the gallery’s summer exhibition Mondrian and his Studios. At the same time, the festival will move out into the city, with live acts, art and performance workshops in Liverpool ONE’s Chavasse Park as well as a parade of living sculptures through Liverpool city centre. From 7pm, young people can experience Tate Liverpool in a whole new way as Tate Collective Liverpool and selected cross-disciplinary artists including The Costumologists and Youmeandus transform the gallery into a digital playground of music, performance and art.

On Sunday 20 July, from 12pm, Tate Liverpool will be taken over by young designers, graphic artists and printmakers selling their work at an art fair arranged in collaboration with Inprint, a startup established by Liverpool John Moores University and Manchester Metropolitan University graduates of 2013. Print and design studio Jonzo will be running a zine-making drop-in, while acoustic musical performances animate the gallery and the Albert Dock.

For more information about Blueprint Festival 2014 and the exhibition go to www.tate.org.uk/liverpool.

Blueprint Festival 2014, produced by Tate Collective for Circuit, is a strand of Flux Liverpool, a city wide celebration of young people’s creativity and entrepreneurialism. Held in Liverpool from the 17 July – 2 August 2014 Flux Liverpool aims to energise young people’s creativity through events, performances, workshops, discussions, and projects. Events at venues across the city will also coincide with and complement the Flux Liverpool programme, including: Blueprint Festival 2014 for Circuit at Tate Liverpool, Young DaDaFest, The BIG Event and the Young Liverpool Film Night at FACT.