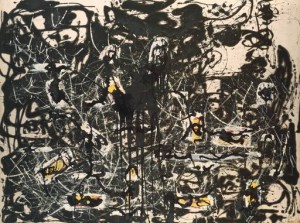 Saturday 4 July – Sunday 5 July 2015
FREE
IT DON’T MEAN A THING IF IT AIN’T GOT THAT SWING
To celebrate the opening of Jackson Pollock: Blind Spots, visitors are invited to Tate Liverpool’s café which will host free live jazz performances during the opening weekend. Pollock was widely considered to be one of the most influential and provocative American artists of the twentieth century, who also had a love for jazz. Pollock was regularly spotted at jazz venues such as the Five Spot Club in New York and his love of jazz largely influenced his work and the development of his action painting technique.

EVENT: Thinking Outside the Box