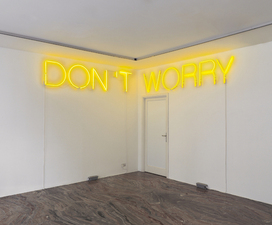 ARTIST ROOMS returns to Tate Liverpool in 2012, with a display of seven important works from Turner Prize winning artist Martin Creed (b. 1968). These works have recently been donated by Creed jointly to Tate and National Galleries of Scotland for the ARTIST ROOMS collection. Creed is the first new contemporary artist to join the collection since it was established in 2008.

Born in 1968 in Wakefield, Creed grew up in Glasgow. He studied at the Slade School of Fine Art, and has exhibited extensively worldwide.

The seven works presented in ARTIST ROOMS Martin Creed are in a range of different media including a neon installation, Work No. 890 (Don’t Worry) 2008, a 21-part drawing, Work No. 944 2008 and a recent series of four paintings from 2011.

Refreshing, unexpected and humorous, Creed’s work challenges our preconceptions and rearranges the rules of conceptual art.

ARTIST ROOMS is jointly owned by Tate and National Galleries of Scotland and was established through The d’Offay Donation in 2008, with the assistance of the National Heritage Memorial Fund, the Art Fund and the Scottish and British Governments. ARTIST ROOMS On Tour is an inspired partnership with the Art Fund – the fundraising charity for works of art, making the ARTIST ROOMS collection of international contemporary art available to galleries throughout the UK.