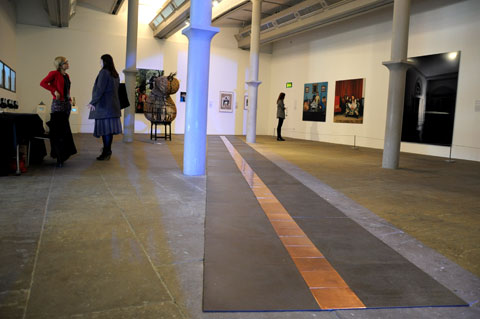 A Sense of Perspective. Curated by Young Tate. 1 April – 5 June 2011 in the Wolfson Gallery at Tate Liverpool. A Sense of Perspective deals with the in between and the undefined. Through the works of international contemporary artists in the Tate Collection, many of which are new acquisitions shown here for the first time, this display challenges our tendency to define and limit our understanding, and focuses on works which highlight cultural, generational and artistic difference.

The artworks on display reflect on the state of “betweenness” as an abstract idea, as an idea of youth as a period in between generations and as an idea of migration as the experience of living between cultures. Works include installations, sculptural forms, video and photography.

Rosângela Renno’s installation Experiencing Cinema, is shown for the first time in the UK since it was acquired by Tate. It is created from projections of found images onto an intermittent steam curtain. The images flicker into a momentary form, before the steam curtain dissolves again and the image disappears. Sarah Jones’ large scale photographs capture the betweenness of young women’s identities, influenced by class, age and social conditioning. And Mother Tongue, a video installation by Zineb Sedira shows how moving from one culture into another can affect your cultural identity and create a language barrier across generations.