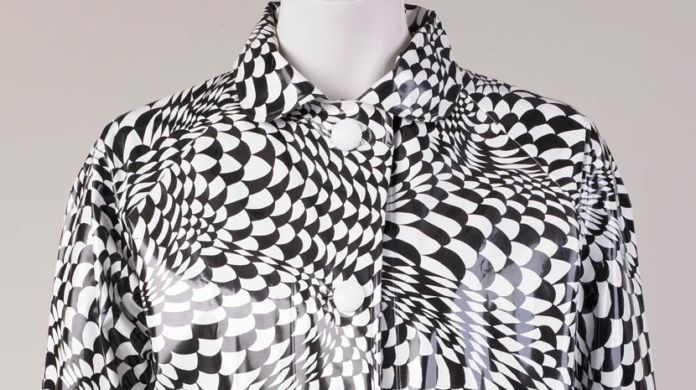 Long derided as a crime against fashion, the shell suit has finally found its place in history in Drip Dry! Synthetic Fibres in Fashion, a new costume display at Sudley House.

Shell suits first appeared as fashion and leisure garments in the 1980s, derived from the earlier track suit which was originally made specifically as sportswear. The example on display, made from polyamide (the shortened version of polyhexamethyleneadipamide, the full chemical name of nylon), is a typical design of contrasting colours.

From the feminine rayon dresses from the first half of the 20th century, to a body-clinging lyrca design by Dolce E Gabbana made in 1999, the differing qualities of these fibres are clear.

One highlight is a ‘Beatles’ dress, retailed by Littlewoods, Liverpool, 1964. Made from Tricel, the trade name for triacetate, this hard-wearing material can be permanently pleated. For this design the word ‘Beatles’ was formed by applying heat to the pleats so that they lay in different directions. The material didn’t fray so could be to be cut to suit the wearer and the rising hemlines of 1960s fashion.

Sudley House: AN AGE OF CONFIDENCE