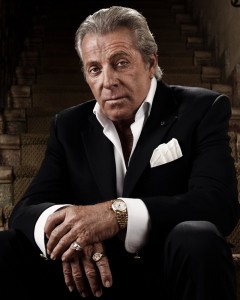 Flying in from New York, actor, singer and raconteur, Gianni Russo, best known for his role as Carlo Rizzi in The Godfather, travels to Liverpool to perform a very special tribute to old blue eyes Frank Sinatra as part of the International Festival for Business Cultural Programme in Liverpool plus a very special one off event at the Four Seasons Hotel in Monaghan, Ireland.

Described by the Four Seasons Restaurant in New York as “A one-man block party, who’s known for his role in The Godfather, Gianni is an accomplished singer unlike any other. Wildly entertaining with a changing cast of guest performers, his show attracts an eclectic mix of moguls, models, students, restaurateurs, actors, filmmakers and some of the biggest names in the music business.”

This once in a lifetime performance in Liverpool will take place during the Liverpool International Business Festival then Gianni will travel to Ireland to perform a special one off event at the Four Seasons Hotel in Monaghan.

Speaking exclusively ahead of his now legendary performance, Gianni reveals his connection to Liverpool: “I can’t wait to come to Liverpool, I was first there with Sinatra on our way to the Red Cross Ball in Monaco. We were the guests of Grace Kelly. To return now and pay a tribute to Frank and his music is an honor. Thank you for the invitation”

Filming will be taking place during the event for HARBINGER, a film by Paul Sullivan:

In June 2013, Paul Sullivan/Static Gallery approached Gianni Russo, who played Carlo Rizzi in The Godfather movie, to re-make a scene from the film. The original scene is between Gianni Russo (Carlo Rizzi) and Al Pacino (Michael Corleone) and is now referred to as the ‘Today I settled all family business’ scene.

The scene is the first time Francis Ford Coppola used the shriek of a crow as a precursor to death, or the harbinger of death and was subsequently used in Godfather II, The Conversation and Apocalypse Now.

The re-make of the scene draws on the use of the crow/raven in art and mythology from ancient times to the contemporary period.

The film/audio work will be shown at Static Gallery and internationally in 2015.