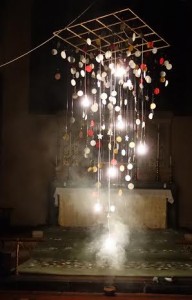 The Mission in the Economy (MitE), chaplaincy providers in North West, UK, together with the Parish Church of St. Margaret of Antioch, an Anglican church built in the mid-19th Century, collaborates with Filipino Jesuit Priest and Contemporary Christian Artist in the site specific installation work entitled “Up is Down, Down is Up.” This work is set up in the former chancel (choir) area of the newly refurbished church of St. Margaret’s acting as an alternative chandelier with its seven 40-42 watts LED clear bulbs.
This installation is part of “The Real Christmas,” an annual participative Christmas appeal for prayer intentions during the Advent as well as Christmas season that culminates in an ecumenical prayer service and thanksgiving dubbed as “Prayers of the City,” organized by the Liverpool City Centre Chaplaincy.
Witnessing the participants of this bidding prayer appeal writing their personal desires on Christmas tree décor paper tags and hanging them on the barren branches of some winter tree, Dy was inspired to create a three-layered work exploring the paradox of divine revelation, incorporating an innocence of child’s play, and offering a communion in secular urban space.
The upside-down Christmas tree formation of suspended colored, glittering, and hand-made prayer tags proposes a different view of beholding its mystery, perhaps as G.K. Chesterton suggests of viewing it by “standing on one’s head.” According to Horacio de la Costa, SJ in his homily: 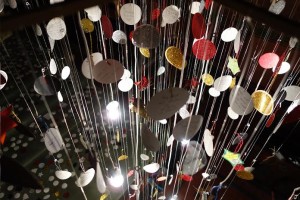 “Chesterton said it for us all: the only way to view Christmas properly is to stand on one’s head. Was there ever a home more topsy-turvy than Christmas, the cave where Christ was born? For here, suddenly, in the very heart of earth, is heaven; down is up, and up is down; the angels look down on the God who made them, and God looks up to the things he made.”
The over-all installation is reminiscent of the popular children’s game pabitin (literally, suspended, for grabs) as known in Dy’s local Filipino culture. Toys, candies and other goodies are strung suspended on bamboo lattice for children to freely grab.  Could this allude to human desires suspended on faith (as represented by nylon threads bearing its light weight) or divine providence buoying them up (as suggested by the aroma of incense rising from the earthen clay pot)? Or just really a child’s innocent try to either enjoy the play or continue the plea?
However ephemeral and industrial the materials employed by Dy, it is worth discovering the “linking element, principle of agglutination” in his installation as suggested by Nicolas Bourriaud beyond the artist’s usage of this kind of material form.
Viewing by appointment. Please contact: Revd. Robert “Bob” Lewis, Princes Road, Liverpool, Merseyside , L8 1TG United Kingdom‎
0 778 940 2954
+44 151 709 1526
For walk-ins, the church is open on Monday, Tuesday, Wednesday, Friday: from 9:30 to 10:00 Sunday: from 9:30 to 11:30