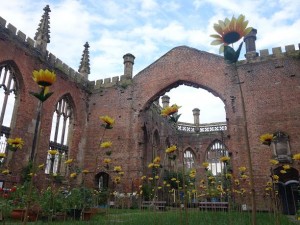 In the Philippines the month of May is dedicated to commemorating Marian devotion known as Flores De Mayo.

Several Filipino communities in Merseyside (Liverpool, Fasakerley and Whiston), Norwich and Ipswich recently held their respective Flores De Mayo activities. These programs varied from communal recitation of the rosary, the Eucharistic celebration in honour of Mary to the traditional procession of the Santacruzan.

Philippine artist Jason Dy, SJ participated in the respective Flores De Mayo activities with these various Filipino communities in the UK. As a priest, he led them in prayer and devotion by presiding at their religious rites. As an artist, he collaborated with them in filling up barren spaces with potted plant blooms. 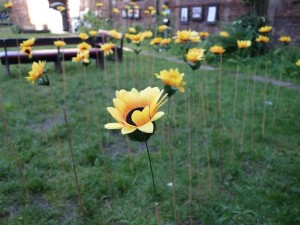 Site-specific interventions have revived lost spaces, one of which was the backyard at Our Lady and St. Walstan’s Church. This forgotten space cleared of grass and adorned with a tree and derelict plaster statue became a promising flower garden. On another site, colourful blossoms placed on the mound of the century-old wooden crucifix contrasted with a grey concrete ground at St. Pancras’ Church.

Initially, at St. Luke’s (also known as the bombed out church), a corner was filled with a cluster of bamboo canes with synthetic sunflowers comprising complete beads of the rosary used during prayer services Flores De Mayo activity held last May 31.

Inspired by these engagements on how his compatriots practiced their Filipino religious culture in UK, Dy conceptualized a participative art installation project by filling the whole nave-garden of the church with bamboo canes and synthetic sunflowers. He pounded more than 200 pieces of 90-cm bamboo canes on the ground and uniformly lined them up in interspersed rows. Visitors were requested to insert the flowers at the tip of the thin poles and invited to make a wish, say a prayer or offer them to/for somebody.

This art project is Dy’s attempt of synthesizing his engagement with the local Filipino communities he met here in UK.  For him, continuing these homegrown popular devotions in foreign land signified a longing of some Filipinos to root themselves in their inherited religious traditions as well as their attempt to transplant these in a new context for succeeding generations to value. This project is an art intervention articulating Filipinos uprooting experience, transplanting and blossoming both as a community and as a church.

The visitors are invited to walk around the field of assembled sunflower plants, to ponder on local traditions such as Flores de Mayo being continued abroad, and to consider the interplay between religion and culture within in popular devotions.

Information of the Installation:

Garden-nave of the Bombed Out Church

St. Luke’s Church – Up To Something: The Fab Collective