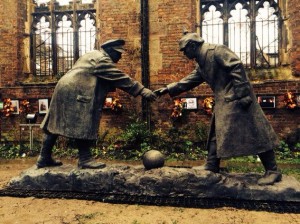 20 December 2014
3pm & 7pm
Free
Burjesta Theatre will be performing an abridged 50 minute version of their recently acclaimed adaptation of All Quiet on the Western Front at St Luke’s Bombed Out Church, Liverpool. The performance is part of a series of events entitled All Together Now – In No Man’s Land taking place this week in Liverpool and centered around the unveiling of a recently commissioned statue showing a German and British soldier offering their hands in a gesture of peace to commemorate the 100th anniversary of the Christmas Truce and football match in 1914 during World War I.
There are lots of other events taking place throughout Liverpool this week before the statue is taken over to Germany before its final destination in Flanders.
For more information and to see what else is on this week at St Luke’s, visit the Liverpool Echo website.

St. Luke’s Church – Up To Something: The Fab Collective