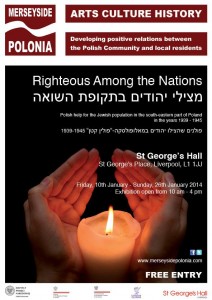 Prepared by the Polish Institute of National Remembrance, Rzeszów Branch. “Righteous Among the Nations” tells the story of bravery and tragedy of Jews from the Małopolska Province and Poles helping them in the grim days of the German Nazi occupation during the Second World War.

Created in 2008, the exhibition has been so far displayed in many locations, including Warsaw, Cracow, and Tel Aviv. It will now arrive to Liverpool on the invitation of Merseyside Polonia. “In spite of ubiquitous terror, numerous repressions and mutual antagonisms separating the Polish and Jewish communities, there were Poles who decided to help Jews survive the German occupation. Doing so, they risked their lives as well as the lives of their closest relatives.”