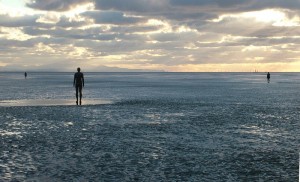 This special public event honours the 10th Anniversary of Antony Gormley’s Another Place, commissioned for Crosby Beach by Liverpool Biennial in partnership with Sefton Council. Since 2005, this extraordinary public artwork has attracted millions of visitors to the region, and has become a cultural destination.

This major installation comprises 100 cast-iron sculptures made from 17 different moulds taken from the sculptor’s own body, installed on Crosby Beach on the Mersey Estuary, all facing the open sea, and evoking the relationship between the natural elements, space and the human body. The work covers a distance of almost 3km, with the pieces placed 250m apart along the tide line, and up to 1km out towards the horizon. The movement of local tides and daily weather conditions dictate whether the figures are visible or submerged. It is one of the most well-loved and widely recognised public art works in the UK.

Tim Marlow joined the Royal Academy of Arts in 2014 as Director of Artistic Programmes. Prior to this, he was Director of Exhibitions at White Cube (2003-2014). Over the past decade he has played a major role in White Cube’s evolution into one of the pre-eminent contemporary art galleries in the world. He has also worked with many of the most important and influential artists of our time including Jake & Dinos Chapman, Chuck Close, Tracey Emin RA, Gilbert & George, Antony Gormley RA, Damien Hirst, Gary Hume RA, Anselm Kiefer Hon RA, Julie Mehretu and Doris Salcedo.

A Night At St Georges Hall