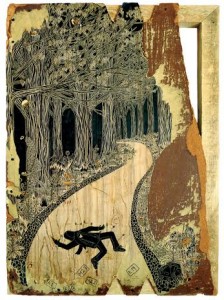 Katie Craven is an up & coming comic book artist whose intricate and playful style of illustration is steadily gaining her a dedicated following both at home and afar. Having exhibited her first solo exhibition at the much loved (and missed) Drop The Dumbells on Slater St last year she also published her own comic Angus & Felix. A sombre exploration of our species and current situation as viewed from the perspective of a pair of strange beings from a magical land. The first of many no doubt.

Occasionally Katie paints with the mischievous and camera shy Tomo, whose work veers somewhere between graffiti and the more accepted circles of fine art. His work has been spotted both on and off the streets of Liverpool for some time yet it doesn’t clamour for attention, often being painted in forgotten or out of the way places where people seldom visit. Notably Tomo won The People’s Choice Award at The Liverpool Art Prize in 2012.

Having both developed individual styles that just happen to compliment each other so well, it was inevitable that the two would step up their occasional painting sessions into a full on collaboration. As for the title Down In The Galley, all we can say for now is that it is situated in a place that was once a kitchen and lies several feet below the ground. The details will be released two days prior to the event on 29 April. Information will be available on both Katie & Tomo’s websites as well as their associated social media accounts.

Whilst the full details and whereabouts this exhibition are currently under wraps we can say for now that Katie & Tomo are working closely with associates; Priya Sharma (one time director at Liverpool’s now defunct Wolstenholme Creative space), Grace Harrison (writer & social researcher) & Alex Elham (all round useful person). The five of them have been busy transforming this lost space, giving it a new breath of life in a true DIY fashion. This may well be the first of many events.