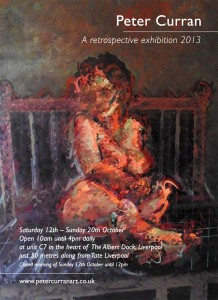 ‘Peter Curran A Retrospective Exhibition’ opens for public viewing on Saturday 12th October 2013 in a pop up gallery just 50 meters down from Tate Liverpool in The Albert Dock.

Like many artists past and present, Peter struggled to balance the drive to create with the demands of living. He chose to follow his drive to paint above all else. His refusal to compromise his vision meant that, after early exhibition success such as first prize out of 600 entries in ICI’s National Small Paintings Award 1972, he drifted further away from the art establishment and simply lived to paint, just surviving on the support and patronage of a few friends.

When Peter so tragically and suddenly died on the 2nd September 2006 he left an enormous collection of amazing works in his studio and within a few private collections.

In his life, Peter often expressed regret that he didn’t achieve greater recognition within the art world. Following his funeral some of his close friends vowed to host an exhibition showing an extensive range of his work and this exhibition is the result of that promise.

Peter loved Liverpool and was inspired by the city’s world famous architecture, forming the subject matter of much of his later work.

Peter was adopted soon after birth into a family in Bristol. His start in life was difficult and, like many such children, he struggled to find his family identity leaving home at 16 years of age to make his way in the world.

The search for an identity played an important role in Peter’s creative life and can be seen in many of the highly original and accessible works on view at the exhibition and on the newly launched website: www.petercurranart.co.uk.

Pop Up Gallery Unit C7 50 meters down from Liverpool Tate