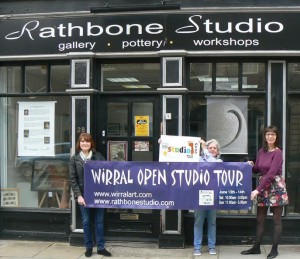 The Rathbone Studio makes its inaugural appearance in Wirral’s Open Studio Tour, featuring work by proprietor Janet Holmes, Linda Mary Evans and Jean Maskell. A new film that reveals the creative process behind the work of many local artists will also be premiered.

Based on Argyle Street, on the site of the famous Della Robbia pottery, the Rathbone (named after Della Robbia founder Harold Rathbone) has been giving local artists display facilities and training for the last three years.

The Open Weekend is designed to be informal and allow people of all abilities to see what the studio has to offer and to try their hand.  Jean Maskell, who started as a student at the Rathbone, has progressed to exhibit her own work. She specialises in ceramics based on local shipbuilding and has also put together a ‘Salute The Shipbuilders’ display with poetry and video. There will also be a sneak preview of experimental filmmaker Ryan Garry’s new production Fifteen Minutes of Fame, featuring fifteen local artists talking about their work.

The Open Weekend at the Rathbone is part of the Wirral Open Studio Tour; artists all over Wirral are opening their studios to the public.

There will be free refreshments and a raffle at 28 Argyle Street, Birkenhead, Merseyside, CH41 6AE.

The Earth, Fire and Water exhibition will continue until 25 July, opening Tuesday to Saturday 2– 5pm