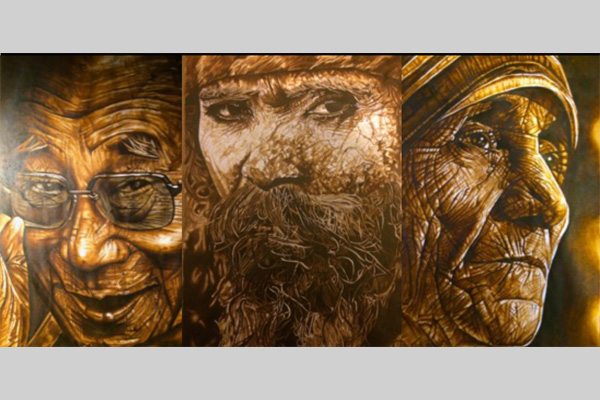 In this collection, he has used the traditional methods of ink painting. This form of mark making is created by scribing, and layering the washes to create these beautiful portraits. These portraits have been made with home made quills that use vintage pen nibs (100 yr. old) from the French Pyrenees. He paints thin washes of ink and scribed marks, layering them to create depth and definition.

This exciting new series depicts holy people from all religions who have/had dedicated their lives to developing compassion for all sentient beings, and to bring peace on this Earth.

The exhibition begins cross country, at the same time, with venues including Sunderland Minster, Liverpool Quakers House, before moving on to tour the country and beyond. The exhibition is not just there for reverence, but to start a dialect between visitors on issues such as compassion, peace and the trials and tribulations that these people have undergone in their search to benefit other sentient beings.

The exhibition takes the idea of Bodhisattva as its inspiration. A bodhisattva is literally a living being (sattva) who aspires to enlightenment (bodhi) and carries out altruistic practices. The bodhisattva ideal is central to the Mahayana Buddhist tradition as the individual who seeks enlightenment both for him- or herself and for others. Compassion, an empathetic sharing of the sufferings of others, is the bodhisattva’s greatest characteristic.

It is held that the bodhisattva makes four vows expressing a determination to work for the happiness of others: “However innumerable sentient beings are, I vow to save them; however inexhaustible the passions are, I vow to master them; however limitless the teachings are, I vow to study them; however, infinite the Buddha-truth is, I vow to attain it.”
Bodhisattvas are thus naturally engaged in society, actively struggling both to change themselves and make the world a better, more humane place for all people.

These exhibitions are part of the All We Are Saying (AWAS) project, which is a created by artists for peace. All We Are Saying is an international “shout out” for peace.
So far it has working hubs in Liverpool. Middlesbrough, Gateshead/Newcastle and Sunderland. They are all self regulating and are responsible for everything they do within their hubs activities. There are also other groups within the organisation interested in photography, performance, music, poetry, writing, and fine art, with a coordinator who knows the requirements for that particular discipline.
Around the regional hubs there are also small independent artist groups following the same philosophy as the hubs.

The ideology remains as always, apolitical, non-religious, non partisan or nationalistic, and (as far as possible) zero budgeted and non profit making. This is not a commercial exercise but a cry from the heart. At the moment we have something like 70 to 90 creatives working for peace. We have “voices” in Northern Canada, New York, Florida, Netherlands, Germany, Republic of China, all over the globe.

This is to support an ideal. My role is to ghost manage the project because the ideal is the driving force.