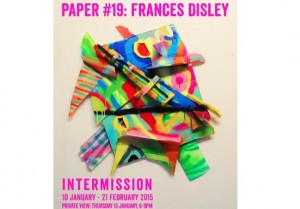 With the rehearsals now completed and the stage set… Frances Disley suggests that if the studio is the rehearsal space for the works then the gallery must be the theatre.

During the summer, Liverpool based artist, Frances Disley was been selected for PAPER’s Artist-in-Residence scheme, Exploring PAPER. Intermission is a solo exhibition of Frances’ work that draws together the experience of her residency at PAPER and the work that she has since developed from her experience there. Essentially the six-weeks she resided in PAPER was the rehearsal, and Intermission is the performance.

The slippage between what an artwork is and what is the dressing plays with notions of completeness within Frances’ work. The consideration of how an artwork is resolved and ready for exhibition is foremost, and Frances displays her crude paper sculptures in different stages of completion or resolve, which toy with both the process and the methods of display.

Frances completed her printmaking masters at the Royal College of Art in 2004. She is based at the Royal Standard and lecturers at Liverpool Hope University. She is also manager of the Bluecoat print studios in Liverpool. She completed her Exploring PAPER residency summer 2014. Recent exhibitions include – Exchange Rates with PAPER, Schema Projects, Bushwick, New York / Kölner Graphikwerkstatt, Cologne / “50/50” Syson Gallery, Nottingham / “Over Seasoned Part Deux”, Salt + Powell, York / 1 Pound Fish, S1, Sheffield.