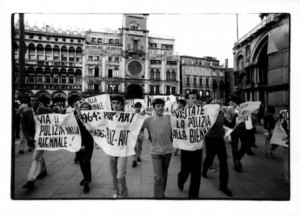 Not All Documents Are Records represents Open Eye Gallery’s contribution to the Liverpool Biennial 2014. The exhibition, curated by Lorenzo Fusi, looks at three key international visual art platforms through the lens of photography, moving between the past and future. The main theoretical question underpinning the project is: “Can photography be the site where the history of an exhibition is produced, and yet retain its artistic independent autonomy thus overcoming pure documentation?”

The exhibition starts its journey from two of the most important art events in the world: documenta in Kassel, a quinquennial (formerly quadrennial) survey of modern and contemporary art, established in 1955 by Arnold Bode as a means for reconnecting Germany with the most recent developments in the arts (after the war period culturally dominated by the Nazi obscurantism and censorship); and theprestigious Venice Biennale, the oldest exhibition of its kind, founded in 1895. These forums greatly contributed to and informed the so-called ‘biennial model’, a type of art exhibition, international in relevance and ambition, that unfolds and manifests periodically with the aim of ‘photographing’ the status of the arts at a specific moment in time and anticipating the trends of the future. It is in this model that the Liverpool Biennial originates.

The show introduces the viewer to this format by presenting two seminal photographic series – Hans Haacke’s 1959 photographs of documenta 2 and Ugo Mulas’ images of 1968 Venice Biennale.

Haacke was still an art student in Kassel at the time and worked on the installation of the exhibition. After the opening of the show, on his own initiative, he took on the task of visually ‘documenting documenta’. The resulting 26 black and white images offer unique insight on the event. By looking at the dialogue that the selected artworks set up with the space, the way they are displayed and interact with the audiences, Haacke’s images speak not only about art per se, but comment on society as well as on the politics and power relations established by the actual exhibition. These photos have been rarely seen in the UK and represent, in Haacke’s view, one of his earliest accomplished artworks.

Similarly, Mulas started his career as a photographer by taking pictures of another important art platform. His first professional assignment was a photo-reportage of the 1954 Venice Biennale, an event that he went on photographing until 1972. It is consequently little surprising that today Ugo Mulas is mostly known for his intense portraits of artists. Open Eye hosts the UK premiere of the photos he took during the 1968 Venice Biennale (the ‘biennale of the revolution’). The selection on show is held in a private collection and has been curated by Mariachiara Di Trapani. The images document artists demonstrating against the establishment represented by the Venice Biennale (the “policed” and “militarised Biennale of the bourgeoisie”, as the banners held in protest read) and poetically illustrate this intense period of political turmoil and social uprising.

As the preparations for the UK Biennial are underway, Cristina De Middel reinterprets the history of the Liverpool Biennial and imagines its possible future developments by means of a new commission. Spanish-born and London-based De Middel is well known for challenging photography as a medium by questioning the ‘truth’ and ‘veracity’ expressed by images. She came to prominence with the series The Afronauts, a fictional account of the 1964 Zambian space programme that, due to the lack of funding, never came to its full realisation (the artist herself has never been to Zambia).

Likewise, another Spanish artist, Ira Lombardía, infiltrated the legacy of the most recent documenta, held in Kassel under the artistic directorship of Carolyn Christov-Bakargiev and unfolded over the summer of 2012. After a visit to this exhibition, Lombardía included a fictional artist in their exhibition catalogue whose work was created by chance. During the time she spent in Kassel, the artist experienced an ‘epiphany’, the sudden manifestation of an artwork purely created by light inside the Fridericianum (the exhibition’s main venue). The piece on show at Open Eye follows the artist’s philological, yet entirely fictional, playful recreation of the history behind such a metaphysical and unexpected manifestation.