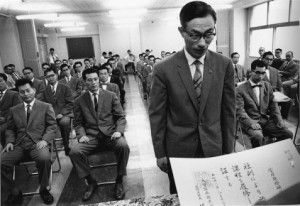 In 1945, post-war Japan made a new start from the ashes of devastation. In the twenty years leading up to the Tokyo Olympics of 1964, it succeeded in undergoing a dramatic transformation, embarking on a path towards becoming an economic power.

These two decades constituted a period truly brimming with creative energy -­­­ a time in which democracy led to the restoration of vitality and free photographic expression, in which new talent pioneered post-war photography.

This new exhibition reflects on the turbulent period that followed the war, exhibiting over 100 black and white photographs by 11 leading Japanese photographers. The photographers selected are Ken Domon, perhaps the best-known Japanese photographer of the 20th century for his cool-headed photo-realism. Ihee Kimura, whose approach to realism was distinguished from Domon’s by its unique aesthetics. Hiroshi Hamaya, who photographed the climates and environments of mountain and agricultural villages together with the lives of their inhabitants.Tadahiko Hayashi, who produced marvelous portraits. Shigeichi Nagano, Ikko Narahara,Kikuji Kawada, Shomei Tomatsu, and Yasuhiro Ishimoto, who represent a younger generation of photographers, and Eikoh Hosoe and Takeyoshi Tanuma, who were two of the photographers who demonstrated the creativity of photography. Each of these individuals has their own style and produced significant works that are important records of this period.

Rather than arranging the works by period and author, this exhibition is divided into three sections: “The Aftermath of the War” “Between Tradition and Modernity” and “Towards a New Japan” Although the arrangement may seem arbitrary, the sequence provides a vivid narrative of the convoluted aspects of this complicated era.