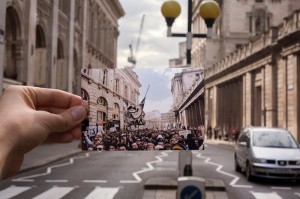 A talk on Macrae’s series G20 Double Takes, discussing his experience of photographing in the G20 riots – and how to best capture a mob without becoming part of it.

“The behavior of both police and protesters on that day (the 1st of April 2009) was so extreme, and the location that the most violent demonstrations happened (right outside the Bank of England, among neo-classical columns and banking logos) added to the drama. I had taken pictures at demonstrations before, but this was another level of intensity. During and after the demo, I found the process deeply affecting – indeed, quite scary.  Angry scenes were playing out seemingly all around me, with blood being spilled in broad daylight. I almost felt like if these people managed to break into the Bank of England and RBS – two institutions at the core of British society – and set them on fire, all hell would break loose! Perhaps British society might even collapse. They didn’t manage it – the police held them back, and maybe they wouldn’t have done that anyway – but on that day, at the height of the financial crisis, something genuinely apocalyptic seemed possible to my young self.” – Billy Macrae