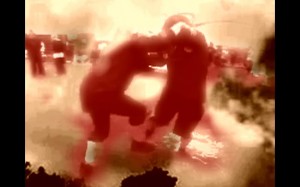 Solo show by Anna FC Smith at Museum of Wigan Life, examining the brutal working class contests of clog fighting and reassessing the activity as a self-regulated and convivial sport.

Art combines with historical research in this exhibition where Anna FC Smith has exhumed the lost history of Purring in Wigan and its surrounding areas. The exhibition will be accompanied by an exciting events programme including special workshops with sound artist and DJ Scrubber Fox, poet Louise Fazackerley and artist/curator Anna FC Smith.

Smith explores this local sport in which colliers would engage in man on man combat, kicking unprotected shins with their wooden and metal soled clogs. These brutal and occasionally lethal matches have only been loosely documented by history; mainly in the official documents of the well meaning and patronising middle classes, and the isolated information has never before been brought together in an exhibition.

Through archival investigation and interviews with the public Smith has discovered mislaid details of this forgotten sport, which she has then interpreted through drawing, sound recordings and film. Her artworks are displayed alongside historic images and objects from Wigan Archives & Local Studies and the Museum of Wigan Life. These items tell the story of clog fighting including the mining industry, clog making, local pubs and the long arm of the law.

Smith’s drawings are light ink works based on an unattributed 17th century drawing of bare-knuckle fighters in Northumberland from the Science and Society Picture Library. The images are re-imaginings of the stories she has gathered.

The sound recordings are taken from old archive recordings of interviews with miners and newly recorded interviews with living relations of champions, old miners, and even fight witnesses. The accounts are vivid and conflicting, each being full of certainty; together they at once bring the truth of the sport closer and demonstrate how much the definite is out of reach.

The films use sound, and newly recorded and found footage to create the atmosphere of both the sport and its surrounding context. They are a dreamlike interpretation of the myths and facts from these multiple histories; there and yet irretrievable moments impossible to capture from this shadowy past.

Smith illuminates this bygone sport with a beam from a stalking searchlight, and exposes a new side to the activity, that of men finding a space in which to rule their own lives and to express their pride and community under their own terms. The sport may have been violent, but in the context of their lives this was a genuine expression of bawdy good humour with a strong vein of chivalry and self-regulation.