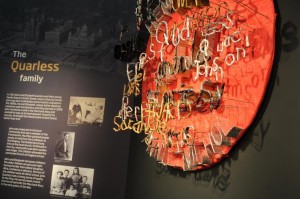 This WW1 Centenary exhibition explores some of the city’s lesser-known stories of the First World War, asking visitors to look at this period of history from a different perspective. The exhibition will also feature a special display recording the outcome of an HLF-funded community collecting project about Liverpool’s Black and Minority Ethnic (BME) communities during the First World War period.

The project encouraged local BME families to research their First World War history. Although Liverpool had quite a small BME community, it was longstanding and although evidence of them is incredibly rare, there were eligible BME men in Liverpool at the time of conscription. With the help of the families who came forward, curators have gathered information and photographs for this special display to highlight stories and experiences of the First World War.

Women gained more independence and responsibility, food and supplies were rationed, and everyone pitched in to help the War effort. This is well known, but what’s often not referenced is that amidst their empowerment and new-found independence, working-class women struggled to manage the funds distributed by government. Some developed drinking problems and pub licensing laws were changed because of cities such as Liverpool and Glasgow where workers usually brought home a daily wage.

While 3,000 Liverpool Pals turned up to enlist on one day, not all men experienced the same patriotism and strike action was rife. Men went on strike throughout the four-year period for better conditions and for war wages to match the higher cost of living.

Also underrepresented in the history books is the huge amount of fundraising that took place in Liverpool. In a city with so many living on or below the poverty line, relief and comfort funds were still being set up by all of the local organisations and prominent families.

Another surprise is that Liverpool continued to grow. While most of Belgium and Northern France was being devastated by shells and bombs, workmen continued to be employed on building sites around the city. The Cunard Buildings, warehouses on Blundell Street and new dwellings in Scotland Road were all completed during the war period.

Using historic and previously unseen images, these themes will be examined along with others which have remained untold over the last century, in a thought-provoking exhibition which will support the Museum’s First World War items already on display in the City Soldiers Gallery and From Waterfront to Western Front exhibition in The People’s Republic Gallery.