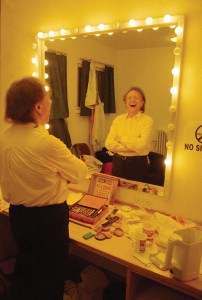 This exhibition captures the man behind the performer through the lens of an award-winning Liverpool photographer who has been snapping the ‘Squire of Knotty Ash’ for over 50 years.

Displaying photographs that are candid, poignant, affectionate and amusing – many taken from the wings during performances – this exhibition will feature just some of the shots Stephen’s taken over the years of Liverpool’s best-loved entertainer doing what he does best.

The exhibition will feature around 50 images of Ken Dodd taken by Stephen Shakeshaft over five decades, in a variety of locations and situations. Whether it be relaxing in the dressing room with a pint, clowning around with some young fans or hanging out with his best mate Dickie Mint, Stephen has been there for a great many moments in Ken Dodd’s career, and this exhibition features some of the highlights.

Museum of Liverpool: Spotlight on the Beatles