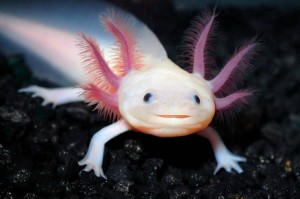 Open Wednesday to Sunday 12-6pm or by appointment

“The eyes of the axolotls spoke to me of the presence of a different life, or another way of seeing”.

In a short story by Julio Cortázar, a man visits a Parisian zoo and becomes obsessed with the axolotls in its aquarium. Over a series of visits he becomes more and more in thrall to the ‘mineral lethargy’ of these creatures to the point where realities merge.

In Alain Tanner’s 1983 film, ‘Dans La Ville Blanche’, a sailor jumps ship in Lisbon, escaping from what he refers to as a ‘floating factory of crazy people’. ‘Axolotl’, as he is nicknamed by his captain, attempts to lose himself in the bright solitude and silence of the city.

The axolotl is an amphibian closely related to the tiger salamander. It is unusual in that it does not undergo metamorphosis into a land animal but retains the characteristics of a juvenile, larval stage amphibian and remains in water for its entire life. This characteristic is known as neoteny and is generally accepted as a sign of devolution, suggesting that the axolotl has regressed back into its aquatic environment from the land.

Axolotl is a group show featuring artists whose work somehow explores a sense of things dissolving. Dissolution itself has associations with the finite, with closure, but things must always dissolve into ‘other’ things and all of the works in Axolotl somehow consider this. In a physical sense, materials seep into one another and works blend into the space, edges of objects are indistinct and energy is converted from one type to another. Dissolution occurs in a metaphysical sense also, with works creating liminal spaces in which the distinction between subject and object becomes blurred, whilst other spaces and times become apparent.

In each case there is particular attention to process, how the artists blend their own subjectivity with the matter of the world to create images by using materials and technology. This combination constitutes practice, which is unique to each artist and represents a way of knowing the world that is exceptional. The difficulty of articulating this ‘made to measure’ knowledge, acquired through experience, using ‘ready to wear’ concepts is also touched upon, highlighting the conflicting systems artists operate within, juggling the experiential and the conceptual. The quiet stillness of the axolotl, as noted by Coratzar and Tanner, stands in for an infinite third space, where knowledge can be shared, but not necessarily duplicated.

Model: Self Organisation for artists – how to make your own...