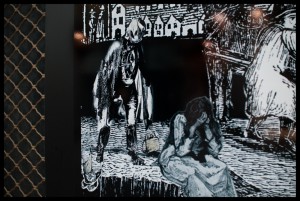 A collaboration by Tony Knox and Frank Duffy

Tony Knox’s Mothman Comic Book will be on display at Metquater Liverpool  alongside author Frank Duffy’s literary reinterpretation of the character, enriching Mothman’s mythological state and historical legacy. Frank Duffy is a Liverpool born author of The Signal Block and Other Tales, Mountains of Smoke and the forthcoming collection Unknown Cause.

This project was possible thanks to the AA2A and Artlab based in UCLAN Sponsored by Okey Signs. Tony Knox celebrates a decade of his Mothman alter-ego, the dysfunctional, bumbling superhero he has explored numerous times over the years, whether through live performance, wrestling, photography or print. 4 August sees the launch of the fourth Mothman comic, which has been limited to five hundred collector’s copies. The comic is only available from the Bluecoat Hub during the upcoming Biennial celebrations, with a free online version of the comic available for both tablets and phones.

Mothman has continued to be a far-reaching project, with the eponymous superhero making his international wrestling debut in Finland and appearing on German TV in a documentary charting the continuing popularity of Beatles tourism.

The Mothman comic series is released every two years to coincide with the Liverpool Biennial. This year’s comic has seen Tony Knox collaborate with artists from Ireland, in past issues included artist from Germany and India. These artists include in issue 3b : Anna McDade, Eoin Flynn, Julia Swarbrick all of whom have given their extraordinary take on the Mothman story.

Metquarter: The Craft of Art