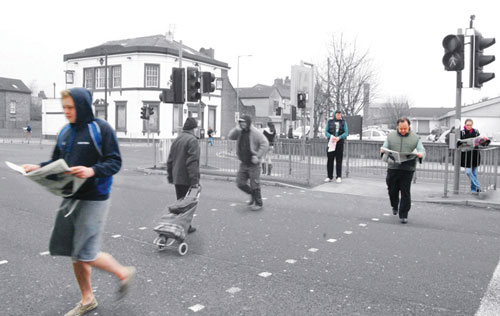 29 June – 2 July 2011 at Metal at Edge Hill Station. ‘Coincidence’ by Laurence Payot
Preview:  Tuesday 28 June, 18.30 – 21.00. Film premiere, food and drink.
Did anything occur in your neighbourhood recently that involved a person wearing a yellow badge?
If so, they may well have been performing in a unique performance by French artist Laurence Payot. METAL, the arts organisation based in Edge Hill Station will be hosting an exhibition between 29th June and 2nd July that will share the experiences of the hundreds of people of Picton who participated together in the project.
Between Monday 23 May and Sunday 5 June 2011, hundreds of people living and working in Picton (including parts of Wavertree, Edge Hill, Toxteth, and Kensington) received a daily text message with a simple action to perform as part of their everyday life. The actions, which were suggested by local groups, created discreet coincidences within Picton’s daily routine.

On Tuesday 31 May, people dropped flower seeds in places that need it. On Friday 3 June Laurence sent a text the group inviting them to leave their thoughts in public spaces: Karen posted on the blog: “OMG can’t beleive I did that! It’s in Sefton Park in front of the old aviary. I wrote it big in coloured chalk: WE ARE BEAUTY, WE ARE TRUTH, WE ARE STARDUST, WE ARE GOLDEN. I don’t know about you but it’s one of the best things I’ve ever done!”

The project co-ordinated by artist Laurence Payot has been made possible by the collective energy of the 250 people and 400 children and parents from local schools who took part. Each day, as they performed their improvised interpretation of the daily instruction, a selection of the performers were followed by local filmmaker Sam Meech to capture evidence of this artwork infiltrating Picton.
The resulting film presents intimate portraits of the project’s performers and their unique take on each day’s action. Come and see how people reacted when Salem said hello to strangers he passed in the street, or when Dee began singing in the street…

Everyone is welcome to attend the preview on Tuesday 28th June 6.30-9pm to learn more about the project and to share their own coincidences. There will be a free newspaper documenting the many anecdotes, strange experiences and personal responses from people, available to take away. The preview will premier the film of the project and will bring together the Coincidence performers for the first time to share some food and their experiences with one another in a friendly atmosphere.

Metal at Edge Hill Station – The Ballad of Juniper Davy...