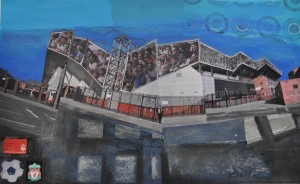 29 October 2014 – 28 January 2015
Monday to Friday 10am – 3pm, Saturdays 10 – 5pm
Free
Liverpool based artist Christine Physick had been interested in the story of Anfield for several years before starting a three year project of  recording the impact of the changes upon the local community.

The show consists of nine mixed media pieces combining photography, paint and drawing media with collage to explore some of the issues facing football fans and local residents as the club expands the stadium at Anfield.

The exhibition shows a small selection of work from the Anfield series.

FACT Liverpool Pride Film Programme: Leave It On The Floor