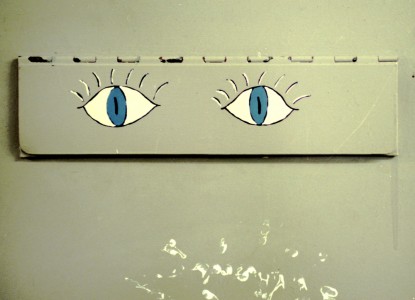 13 May – 24 June 2011 at LJMU Arts & Design Academy. Three Look11 exhibitions.
Restricted Access – Images by Jill Jennings
Jill Jennings exhibits ‘Restricted Access’, a documentation of the Maze prison in Northern Ireland. The work, never before exhibited, discovers traces of human presence that link the prison to the surrounding political landscape acting as a reminder of a more fragile existence.

It contains rarely seen footage of interiors of cells as decorated by the loyalist and republican prisoners, before their early release under the Good Friday Agreement in the late 90’s and follows the transition of the prison from its closure in 2000 to it’s later abandoned and decaying state.  The exhibition looks beyond the brutal façade of steel and concrete  of the  360-acre site which has since been mostly demolished.

Conflicting Accounts – Images by Paul Seawright
Paul Seawright exhibits ‘Conflicting Accounts’ (English premier) which recovers visual fragments to represent the layering of narrative about ‘the troubles’ of Northern Ireland in combination with Victor Sloan exhibiting a selection of work from the 80’s and 90’s that quarry the expressive potential of photographic imagery in the search for meaning in Northern Ireland’s difficult past of two sides, loyalist and protestant and nationalist and catholic.

Images by Victor Sloan
Victor Sloan’s work is hugely impressive in both its technical approach to the whole aesthetic notion of the photographic image and in its range. It disrupts and redefines the notion of the camera as arbiter of truth while successfully allowing the deconstructed subject to act as both moral and political art and it questions our perceptions and quietly encourages us to redefine the image in front of our eyes.

“With Victor Sloan, to my mind the most powerful photographer/artist working in Ireland, there is a combination of techniques…he blends the aesthetic/painting tradition with that of sequencing and multiple imagery, within the one frame. His search is for honesty, truth and authenticity amid the quagmire of myth, dissimilation and revisionist history that is the lot of the North.”

LJMU The Academy – The Artist Teacher M A