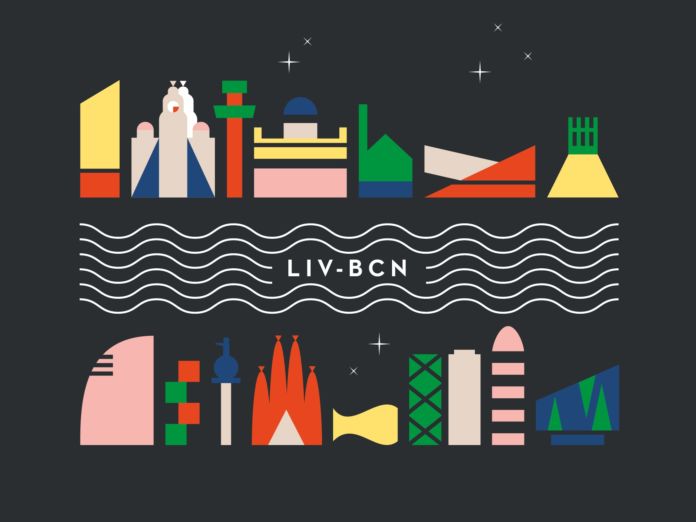 Like the festival itself, the LIV-BCN exhibition invites Liverpool and Barcelona to meet in the middle: it’s a spotlight on superb artists from both cities, referencing the more distinctive elements of their home towns through new work in graphic design and illustration. Main exhibitors Mariadiamantes (Barcelona) and
John Wai (Liverpool) will be joined by a selection of graphic arts students all responding to the theme.

Freelance graphic designer and illustrator, Mariadiamantes (Clara Mercader) works from her studio in Barcelona, specialising in managing corporate identity, art and illustration.Her fresh, smart and colourful approach defines her delicate style, which allows her to say much with little in her projects, combining design and illustration in an attractive, apparently simple, highly communicative way. After doing an MA in Elisava and working for five years as an art director in Shackleton, Mariadiamantes founded her studio in 2012, and her clients include Amazon, Ajuntament de Barcelona, Estrella Damm, Nescafé and Banc Sabadell. A highlight of her portfolio is Visual Cities, with the release of the book “Barcelona Visual” (2014, Lunwerg Editores),  a superb collection of 50 iconic images of Barcelona that represent the city and define it’s moreunusual characteristics. This project was the starting point of and inspiration for the LIV-BCN exhibition.

Designer John Wai has called Liverpool home since the early 1990s, originally hailing from Hong Kong. His passions lie in digital and creative application, producing work that is accessible, aesthetically pleasing and driven by simplicity.

Wai is multi-talented: a professional web developer and designer for more than 10 years, and a computer science graduate, he has worked with some of the best arts, music and culture organisations in Liverpool and around the UK. His diverse clients include EMI Records, The Guardian International Television Festival, Ian Brown, Liverpool Biennial, The Maccabees, A Small Cinema, Just Got Made and The Double Negative magazine. He has been featured in Taschen publications twice (In their Icons of Web Design series) and has won accolades from the Roses Design Awards, the Big Chip Awards and the London International Advertising and Design Awards.

Curated by Laura Robertson, the LIV-BCN exhibition travels to Bau, Design College of Barcelona’s Sala Polivalent and Liverpool John Moores University’s Exhibition Research Centre to launch both editions of the festival this summer.