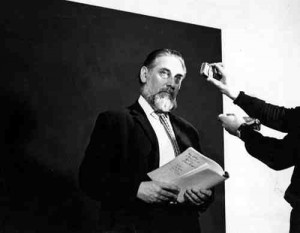 Visitors to the show will have a rare opportunity to see the collection of Cobbing’s documents, books, films, prints and sound pieces.

Cobbing is best known for his performed works in which language is anarchically stretched through the deployment of shouts, groans and hisses, interspersed between more recognisable tracts of spoken word. The exhibition will feature such recordings as the seminal ‘ABC in Sound’, made in 1964 for the BBC Radiophonic Workshop, as well as recorded performances for Fylkingen Records in Stockholm, and the anarchic noise ensembles Birdyak and abAna. The show will also include some of the innumerable publications and printed works that he made, such as visual scores involving pages of collaged words, often distorted on specialist printing presses, blurring the distinction between decipherable text and abstract imagery; the validity of the written word chaotically dismantled. He made one such work for the 1966 Destruction in Art Symposium live on stage, running the stencil for the symposium’s press release through a duplicating machine until it broke up.

Intensely collaborative, Cobbing worked with many outstanding figures of the international sound and poetry scenes of the 1960s and 1970s, including Dom Sylvester Houédard, Henri Chopin, and Cobbing’s wife, Jennifer Pike. The exhibition includes pieces by these and other artists, as well as ephemera from projects Cobbing led, such as the Better Books bookshop on Charing Cross Road, one of the most progressive performance spaces in the UK at the time. Among the other groups and events featured in ABC in Sound are the Destruction in Art Symposium, London Film-Makers’ Co-op, Writers Forum, and aborted plans for an arts centre called Boooooks. The exhibition also highlights Cobbing’s early career as a schoolteacher, where he worked enthusiastically with pupils to set up film screenings, libraries and magazines, which led to his formative project Group H, an experimental art society based in Hendon, North London.

A new film by artist Holly Antrum about Jennifer Pike, will debut at the exhibition. Filmed primarily in the London home that Pike shared with Cobbing, Antrum explores how the experience of an artist’s persona, age and voice, relates to archival material about their practice.

The exhibition’s curator, Rosie Cooper said: “We unearthed some extraordinary material such as correspondences, poetry and ephemera from a range of sources, including Bob’s personal archives and works from other collections and individuals – much of which is seeing light for the first time. Liverpool is an important place for poetry and Bob performed here many years ago so in many ways Bob’s material is coming back to one of its spiritual homes.”

ABC in Sound marks the beginning of Bob Jubilé, a year-long series of events and displays devoted to the career and legacy of Bob Cobbing, culminating in a book published by Occasional Papers.

ABC in Sound and Bob Jubilé are curated by William Cobbing and Rosie Cooper.

With the generous support of the Elephant Trust and Grants for the Arts.

LJMU The Academy – Keep it Slick: Infiltrating Capitalism with the...

LJMU: Beyond the Visible – ALBINA KUMIROVA