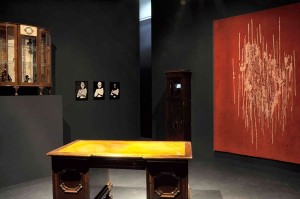 The Exhibition Research Centre (ERC) at Liverpool John Moores University is proud to announce the first solo exhibition in the UK by the German artist Peggy Buth.

Desire in Representation is based on three years of extensive research by the artist on the collections of the Royal Museum for Central Africa in Tervuren, outside of Brussels. The project began as a two-volume artist’s book, the first volume documenting the history of the colonial museum through photographs and archival material, the second based on the writings of Henry Morton Stanley, the Welsh-born American journalist and explorer who travelled through Africa on behalf of King Leopold II of Belgium in the late nineteenth century.

From the two publications the artist has developed a complex body of work, significant examples of which will be on display at the ERC. In Desire in Representation the borders between archival veracity and theatrical mise-en-scène, artwork and historical artefact, exhibition and stagecraft are rendered porous and unstable.

Peggy Buth, born in 1971, lives and works in Berlin. She studied at the Academy of Visual Arts, Leipzig, and Saint Martins College of Arts and Design, London. Her work has been included in many solo exhibitions, among them at Centre d’art contemporain, Parc Saint Léger (2011) and Württembergischer Kunstverein, Stuttgart (2009), and group shows at Weltkulturenmuseum, Frankfurt (2013); Kunstsammlung Nordrhein-Westfalen K21, Düsseldorf (2012); Bétonsalon, Paris (2011) and the Brussels Biennial (2008). She is the recipient of numerous international scholarships from ISCP, New York (2013); Villa Aurora, Los Angeles (2009); and Jan van Eyck Akademie, Maastricht (2004–5).

The John Lennon Art & Design Building: Historic Advertising in the...