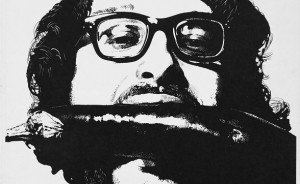 Henri (1932–2000) trained as a painter under Victor Pasmore and Richard Hamilton, and taught at Liverpool Art College in the 1960s. He came to prominence as one of the ‘Liverpool poets’, alongside Roger McGough and Brian Patten, in the best- selling Penguin anthology The Mersey Sound – irreverently urban and popular. Although Henri is best known as a painter and poet, this exhibition reveals him to be a pioneer of performance and collective practices in Britain and internationally, taking part in happenings in Liverpool as early as 1962, and crossing over into the world of rock with the touring band The Liverpool Scene.