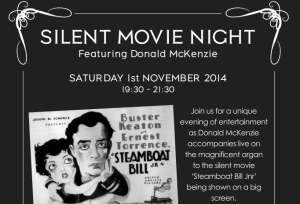 Liverpool Cathedral is set to welcome Donald Mackenzie, a cinema organist, who will be performing in concert during a silent movie night at the Cathedral in aid of the organ appeal.

The first showing of a silent movie ever to take place at Liverpool Cathedral promises to be a unique evening of entertainment. Donald will provide live accompaniment on the magnificent organ to the silent movie Steamboat Bill Jnr being shown on a big screen. This event provides the opportunity to experience the extraordinary quality that Academy Award winning film historian Kevin Brownlow calls ‘live cinema’.

The genre of silent movie has produced masterpieces that can seem breathtakingly modern. It is through these films that the world first came to love movies and learned how to appreciate them as art. They have influenced every generation of filmmakers and continue to inspire audiences nearly a century after they were made.

Liverpool Cathedral – Names Instead of Numbers