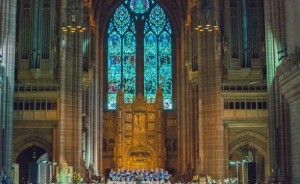 As well as the live performance of Michael Nyman’s Symphony No.11 Hillsborough Memorialon Saturday 5 July, you have the chance to hear a recording of the Symphony inside Liverpool Cathedral. The symphony was performed by the Royal Liverpool Philharmonic Orchestra, with Liverpool-born mezzo soprano Kathryn Rudge and Liverpool Philharmonic Youth and Training Choirs, conducted by Josep Vicent.

Symphony No. 11: Hillsborough Memorial represents the culmination of Michael Nyman’s thinking around the tragedies connected with Liverpool Football Club. 25 years after the Hillsborough tragedy, he says that he hopes it will make a small but significant contribution to the healing process still necessary for the families of the lost fans.

Symphony No. 11 also restores the work known as Memorial to its original 1985 context (having subsequently become well-known in The Cook, The Thief, His Wife And Her Lover). In this new version for voice and orchestra, Kathryn Rudge sings the names of the 96 Liverpool fans who lost their lives, accompanied by music Nyman was recording on the afternoon of the Hillsborough tragedy.