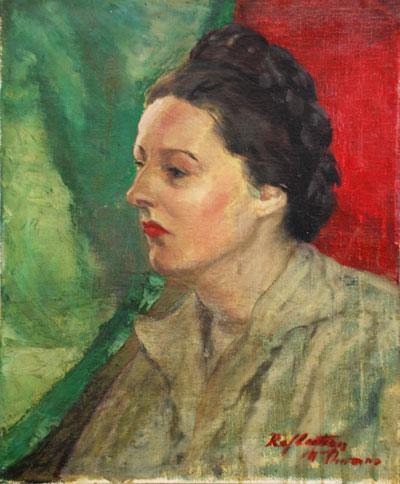 7  June – 14 July (extended) 2011 at Liverpool Academyof Arts, Seel St. ‘Reflections of Isobel K Lornie  (12/06/19 – 17/02/93)’
Isobel Lornie lived and worked all her life in Edinburgh.  Born in 1919, she gained her diploma at the Edinburgh College of Art and spent her working life as a peripatetic teacher in spite of persistent health problems which lead to four operations on her heart.

After her death in 1993 we found that she had kept many of her works – her student works, her beloved illuminated manuscripts, many of her beautiful wallpaper designs and much more.  We in turn kept them and now feel that these beautiful works that this brave and talented lady produced should be shown for both their own artistic merit and the wonderful insight they give into the teaching techniques of eighty years ago.
Isobel’s father was a Scottish Presbyterian minister living and working in Edinburgh where Isobel was born and lived all her life in the family house in Mornigside.
Her father died at an early age when Isobel was a child.  Her upbringing was quite strict and religion was very strong in the family giving her a faith that stayed with her all though her life as you will see in her work.

She went to school in Edinburgh and then on to the Edinburgh College of Art.  When she was nineteen she contracted rheumatic fever which left her with a weakened heart.  She was engaged to be married but broke it off as she did not want to be a burden to her husband to be.  At the age of 24 she was give the choice of just six months to live or have what was for those times a very risky heart operation.   She opted for the operation which turned out to be the first of four.  She was one of the first people to have heart surgery, firstly to simply cut open the closing valves and later to replace the valves with those from a pig’s heart.  This did help a lot but she always had a heart problem.

She went back to Art College and obtained her diploma.  Her health would not let her hold down a full time job as an art teacher instead she became a peripatetic teacher travelling from school to school using public transport which, paradoxically, was probably harder work than if she had been  in steady full time employment  at a single school.

At the exhibition you can see samples of anatomy studies, figure drawing and design work from her art college days.   Before her heart problems occurred she had contemplated a career in fabric and wall paper design of which again there are many examples in the exhibition.   Her greatest love however was the production of illuminated calligraphic manuscript which allowed her deep religious faith to shine through her art.

As the years went on she struggled with her health and had to retire.   She became house bound but staunchly refused to move to a nursing home.  A combination of help from social services and the people from Morningside Baptist Church on Holy Corner, where she had been an active member all he life, helped her to remain at home with her beloved cats until her death in 1993.

Isobel was an inveterate hoarder so, after her death, we found the art work you can see on display stored away in amongst various bits and pieces in  one of the rooms.   We kept them and now think that it would be a fitting tribute to show the works created by a very talented and brave lady.

Open between 12 and 4 pm Tuesday to Saturday. 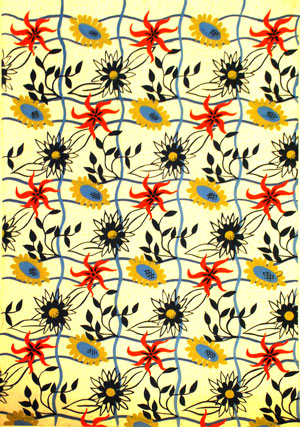 Images: A Portrait of Isobel from her student days
and Wallpaper design

Liverpool Academy of Arts: The Other Side of the Curtain